I was one of those people that was all for breastfeeding, but wasn’t sure I’d really want a baby sucking on my nipple… I mean I don’t want to feel like a cow! The science background in me, however, knew that it was the healthiest option. It’s also a free option as opposed to purchasing formula. So I knew I had to give it a go. Little did I know that it would be one of the most rewarding experiences of my life. There were moments that I thought I wasn’t going to be able to continue…and it was devastating. I cried and the tears surprised me…

Day 1: My beautiful baby girl was born. I did skin to skin and let her latch as soon as she wanted… its all a blur now, but if I remember correctly she latched on as soon as I offered it. She was cluster feeding… ALL the time. Every hour. OUCH! My nipples were sore, raw, bleeding and cracked.

Day 2: OUCH I mean what else is there to say

Day 3: I was released from the hospital, but baby Caroline was admitted another day. She had been born at 37 weeks, and her bilirubin levels were just barely pointing to possible jaundice. They wanted her to gain weight and tackle the blue lights before she could go home. 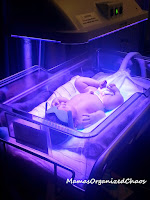 So we were transferred to the pediatric wing. Caroline had to stay under the blue lights with eye
covers on (which by the way they DO NOT stay on). We had two chairs to sit on. Again…OUCH my lady parts were far from healed and I needed to rest! My husband pushed the chairs together so I could lay down and he had me sleep while he kept on baby watch. We set our alarms to feed Caroline every 2 hours as they wanted. 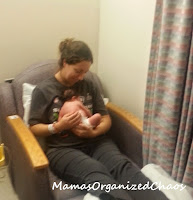 They had me pumping because they wanted as much food in her as possible. No one bothered to tell me that this was kind of pointless…you have no milk by day 3…just colostrum. So I was pumping and pumping and getting just a couple of drops. I was so frustrated. Still my nipples were cracked and bleeding. They were having me add my couple of drops to formula, and then we had to syringe feed Caroline to get as much food in her as possible.

We got released from the hospital late on day 4. We were exhausted needless to say. But since we were syringe feeding and I was not letting her latch (since she had to stay under the lights)…my nipples got a HUGE break!

So back to breastfeeding…

Which, before I go on, let me say that I am now almost on month 6 and we are going strong with no issues.

Here’s what I did when we got home from the hospital:

Fed her every 2 hours as instructed
After each feed I pumped and stored the milk
I wasn’t getting much, but I would add it together and save it
In the middle of the night my husband was using that mixed with formula to syringe feed her once so that I could get a couple hour stretch… I was up anyways though 🙂
After about day 6, I started seeing an increase in the amount of milk that I was producing, and I was sooo proud!

My nipples had almost healed up at this point which I attribute to a few things:

1. The day and a half break I had from Caroline latching while we were in the hospital. My nipples just got to breath and take a rest. If possible I would suggest doing this. Pump the colostrum and mix it with formula… so they are getting all the goods, but you are getting to recover from the first couple of days where it feels like a parana has gone to town on your nipples.

2. While I had that small break I was pumping to keep my supply… breast milk as it turns out is natures best healer! I would rub the milk over my nipples and it helped tremendously!

3. I hung out topless for like a week! Even in the hospital I never put a shirt on. I figured they were all doctors so it didn’t matter. The minute I would put a shirt on and cover up, my shirt would literally stick to my nipples and I’d have to rip it off. UM NO! The air really ended up helping to heal as well.

4. Nipple cream! The hospital gave me lanolin. I have no idea why people like this stuff. It is so sticky and thick you can’t even spread it. It did no good for my bleeding nipples. When I got home, I switched to the nipple cream I had purchased already… Earth Mama Angle Baby. LOVE LOVE LOVE this stuff. I went and bought like 6 of these…one to keep by the glider, one to keep by my bed, one downstairs, one in the diaper bag, etc. Turns out the cream works so good that I only needed it for a couple of weeks to ward off any issues. So now I have a bunch of hardly used bottles just hanging out…I guess I’ll use it again for baby number two one day!

Once my nipples were all healed up, it was smooth sailing from then on. I would have dips in my milk supply, but then it would regulate itself…nothing that ever impacted Caroline. After probably a month of pumping after every feeding, I decided to only pump in the middle of the night and after the first morning feeding. This kept the freezer supply up. At around 5 weeks, we were giving Caroline 1 bottle a day. We wanted her to be able to take a bottle, and she was latching well on my breast, so we decided it was time. It worked so well for us. My husband would feed her the bottle once a day. This gave us flexibility to go out and feed her on the go without me having to whip out a boob!

Once she was sleeping through the night, I continued pumping in the middle of the night for a while, but then just stopped cold turkey. My boobs hated me for the first few days. I would wake up so engorged that I had to pump before I could even feed her. Eventually though (maybe took 4/5 days), my body knew to not produce so much milk in the middle of the night. It is amazing what the human body can do!

My last piece of advice for making it through breastfeeding successfully… get on a schedule. Many of my next posts will be schedules that I have made for baby Caroline. She feeds at certain times…not any time she wants. Meaning my nipples are on a schedule too! They aren’t being sucked on 24/7! The schedules are the most amazing thing I’ve done for Caroline and myself throughout this amazing journey.

It is amazing how I’ve also gone from not really caring about breastfeeding…to it is the most amazing thing I’ve experienced! I love it and have gotten super emotional at the times that I thought I was going to have to give it up. It is well worth the challenge to succeed at this. Such an amazing bonding experience.