In October of 2012 we started trying to conceive. I remember
talking to my husband asking if we could start sooner than we really wanted to
conceive…because I had heard that it can take a typical, healthy couple
anywhere from 6 months to 1 year to be successful.  After a full year of trying and using
ovulation predictor tests we asked our OB for the next steps to get things
moving.

The first test we had done looked at the lining of my
uterus. They inserted a catheter and filled my uterus with saline solution to get
a better look. Everything looked great. All of the blood work also came back
perfectly fine. We then had an HSG done, and one tube looked potentially
blocked as the dye hadn’t gone through the left side.

The next step was either to repeat the HSG or to have an
exploratory laparoscopy done. Because of my history of pain in the lower
abdomen, we decided to have the laparoscopy. The laparoscopy kept me from work
for several days and the results showed that both tubes were open. Everything
looked great, except they found one, very tiny area of endometriosis (they
biopsied the area and had this confirmed). 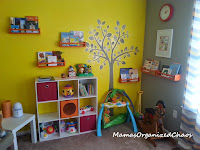 Over the holiday break (I’m a high school teacher), I decided that “if I build it she will come”. I painted the nursery and just started getting everything ready. We went down to visit my family and brought back a car full of baby stuff from my mom and sister. I knew I had to just stay positive and that this WOULD HAPPEN for us!

We then attempted two months of clomid cycles with our
doctor. The first cycle revealed that I had not ovulated so during the second
cycle we increased the dosage from 50mg to 100mg. They were both unsuccessful,
but I did successfully ovulate during the second cycle. At this point there was
nothing more that our OB could do except to refer us to Shady Grove fertility
clinic. We met with Dr. Sagoskin and decided on our course of treatment:
clomid, coupled with gonadotropin injections, a trigger shot, and IUI.

Our first cycle with Shady Grove was in February of 2014.
Day 3 I went in for my ultrasound, only to find out that I had a 5cm cyst on my
left ovary. They cancelled the cycle and placed me on birth control pills. The
high estrogen levels were to help with shrinking the cyst. In March, my next
day 3 ultrasound revealed that the cyst was almost completely gone. I had 14
antral follicles. This was great news and allowed us to proceed with treatment.
I took 5 days of clomid on 50mg and an injection of Bravelle. On day 11, my
largest follicle was 12mm. This was not the size they wanted. That evening I
was instructed to do a second dose of Bravelle. I went in two days later, and
the follicle had grown to 19mm! I did the trigger shot that night, and had an
IUI two days later (3/27). We are now in our first two week wait with Shady
Grove. I am hopeful that we have conceived this time! 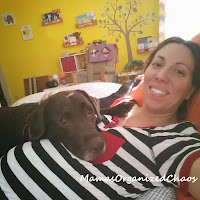 It is now April 16th. I’m pregnant! Just in case
you didn’t hear that… I’m pregnant! Holy cow! I found out on Friday, April 11th.
My beta levels were at 297. They were rechecked the following Monday and were
over 900! Checked again today and were almost 1800! We are making such good progress.  Our first ultrasound will be next Monday. On
April 21st we get to see our baby for the first time! Maybe even
find out if there is more than one. I can’t even express how excited I am. My husband
talks to my belly already… yes I have a belly already! He kisses my belly hello
and goodbye. I fall in love with him more every day. I can’t imagine the love I
am going to feel for this baby. I already love little William… or maybe it is
little Caroline…. Or maybe both!

Or join our Facebook group for discussions with me and other mamas!