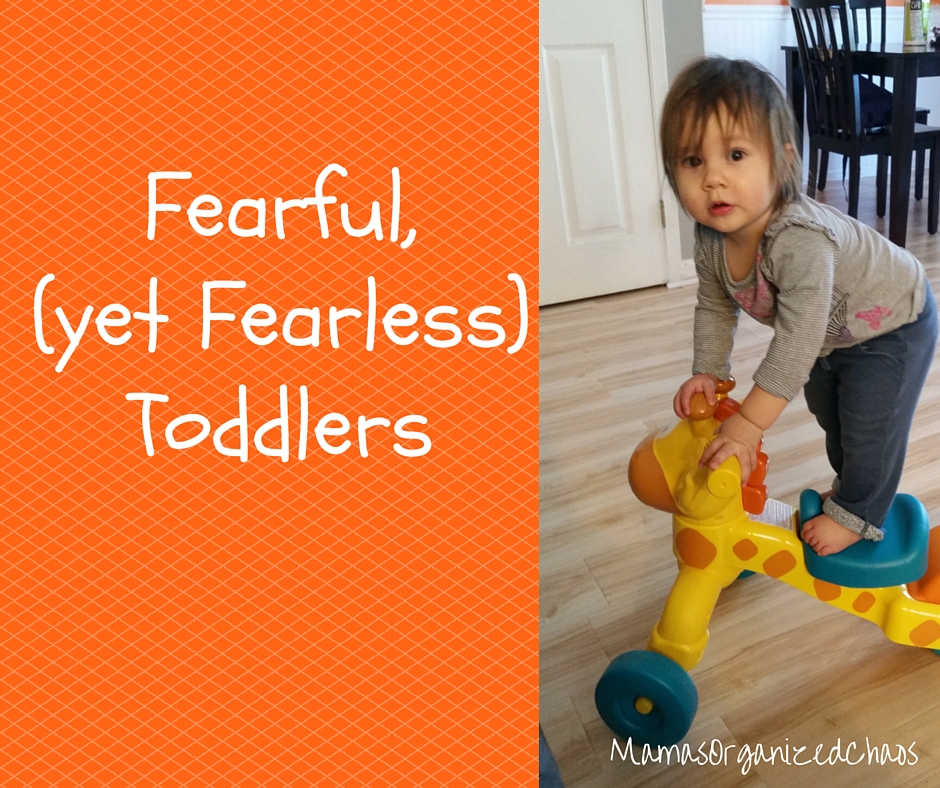 In last two weeks, Caroline has developed a heightened hesitation and sense of being scared of things. I have noticed changes when she interacts with new people, as well as objects and situations that she isn’t as comfortable with. She also still retains most of her fearlessness, however! She climbs on top of anything she can, would probably jump into a pool if I let her, and jumps into the foam pit at the trampoline park all on her own!

She is becoming very hesitant and shy around strangers.

If she so much as sees someone coming near us, she holds on to me a little tighter, and even hides behind me. If someone is perhaps located in the direction we are going, she tries to change direction and doesn’t want to go that way anymore. She stops in her tracks and assesses the situation.

When people come up to her (to say high to the cute baby, of course), it now causes her to cry.

I have noticed a couple of things:

– She reacts more strongly to some people


What we are doing

I think it is very important to tell her that it is ok to be hesitant, and it is ok to be shy. “Always trust your gut” is a very important message. She does not have to talk to (or interact with) strangers. On the flip side of that, I am also trying to explain to her that she can be polite and say hello in return. I am also informing her when we know and trust someone. We reinforce that concept of staying close to Mama and Daddy, and that we are always assessing new people as well.

I know this has happened with a couple of things lately, but the only one coming to mind, was her reaction recently to a pine cone.

She has seen and touched pine cones before. We were walking down to her favorite stop sign, and she spotted a pine cone. She stopped dead in her tracks and was pointing and saying “there, there there!”. I told her what it was. She stepped closer, looked, then backed up. She did this several times and seemed to be quite frightened. I picked up the pine cone and held it far away from her. I was explaining to her that it wouldn’t hurt her, and that mama was holding it and that everything was still ok. She was very curious, but still wouldn’t come near the pine cone. I set it back down, and tried to get her to keep walking. She would not walk passed it. So, I tried to head back towards home with her. She wouldn’t have anything to do with that, either. She was fixated on the pine cone. Eventually, she worked up the courage to walk over to it and pick it up. It was amazing to see how she seemed to be thinking about things, and working through her fear right in front of me! In the days following, she’s been completely fine with pine cones!

This fear actually isn’t new. I first noticed it back in February when we were in Palm Springs. That California wind came up and we happened to be walking around outside together. She ran for my legs as the wind blew a piece of trash near her. She was so startled and didn’t know what had just happened. She climbed up me faster that I could grab her it felt like!

The same reaction has been brought on by:


– Sudden ignition of fire (at a Japanese steak house)- she was NOT a fan! LOL

– Leaves blowing in the wind

It is very interesting to see how she deals with these new fears. She seems to really confront them head on. No matter what it is, she gives into her natural curiosity and observes closely. She stays close to Mama at all times, and holds on tight. But after awhile, she seems to want to let go, be independent, and address the object/situation on her own. It has been very interesting to observe this process. She seems so strong and so brave, and also listens to her natural intuitions. I am glad that she has become hesitant of strangers (better than the alternative), and that she seems to have a natural gut feeling about certain people. This is such a good quality to have and to listen to.