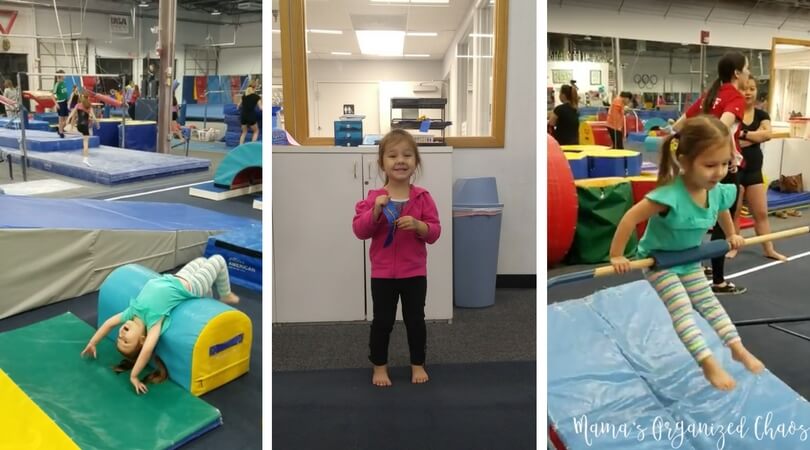 Caroline has been in gymnastics now for 1.5 years. That’s half of her life! As a mom, I have such mixed feelings about it…

I LOVE the physical challenges that it presents to her. I love the energy release, the focus it requires, and the fun she has.

It has built her core muscles, helped her with balance, and she’s a full year ahead on some of her physical abilities (according to her pediatrician).

All of that alone is reason enough to keep going with gymnastics!

If you need even more reasons, check out this great post on the benefits of gymnastics for kids.

1 year ago, Caroline successfully walked across the balance beam all on her own.

A full year later, she can do a back flip (mat assisted) all on her own, and she attempted flipping herself over the bar for the first time unassisted!

She can jump up, and push up on the bar with her arms straight, and hold her position. It’s incredible to see the strength and coordination that she’s gained!

We are not the type of parents to force an activity or sport on our child. Caroline tried gymnastics and had fun with it and excelled at it, which is why we’ve kept her in it for so long.

We’ve always said that, if at any time she no longer has an interest, we’ll pull her out.

There have been moments that we were close to doing so!

The first moment happened when Caroline started having anxiety around a mat that is ripped.

She had so much anxiety around this mat, she was unable to participate in class for a few weeks. We’d show up and she’d refuse to do anything.

I almost decided not to sign her up again. Then, she moved past it and started excelling again. So we kept her in.

Then she moved up to the next level- preschool level. She’s in the class without me now. Again, she just excelled.

Then, more anxiety happened. This time around new people. New people in her class, new people just out on the floor during her class, etc.

Again, it was to the point that she wasn’t participating in class unless I was by her side or at least on the floor.

Again, I thought about stopping the class after the session was over. Then she moved past the anxiety, and went and did back flip all on her own!

And she can jump up on the bar and hold her position with straight arms. WHAT!?

She focuses, and just does so amazing when she puts her mind to it. I was blown away when I watched her do these things last week.

She was in seemingly a bit of a plateau skill wise, and then all of the sudden all of her observation, listening, and practicing just sparked a fire and got her moving at a whole new skill level. I am so impressed.

So, of course, now we’ll be signing up for the next session! LOL!

Why do I go back and forth with this you might be wondering? A few reasons…

Gymnastics isn’t the most expensive activity we could be doing (in fact we chose it because it was pretty reasonable compared to others), but it adds up quickly!

If at any time it’s no longer a good fit for her, it’s not worth continuing to put money towards.

2. I want her to try other things.

My intention was to have her do all sorts of activities at a young age, not be just focused on one.

We can’t afford all of it, however, nor do we have the time. If I want her to try ballet, she’d have to stop gymnastics.

When she’s enjoying it as much as she is, and excelling as much as she does, however, it’s so hard to pull her out simply to have her try something new.

She’s put a lot of work in, so I hate to pull her out if she has a lot of potential in this sport. I know, I know, it’s Mama just having some emotional tie to it at this point, but it’s there!

On the flip side, as I mentioned above, she’s spent half of her life doing the same activity. I so never intended to spend so much time on one thing!

At the end of the day, if Caroline is still having fun, and still doing as good as she is, we’ll probably be keeping her in.

If the day comes, however, that she says it’s no longer fun, we’ll let her stop, of course! Although boy will that day be hard for me!

I’ve watched her in gymnastics from the moment she was barely walking. My heart was so full of pride and happiness as I watched her walk in without me for the first time.

And every time she masters a new skill I watch in awe.

I don’t know what her future is in gymnastics, but I have to say I just love watching her love something so much and do so well.

Gymnastics has not only been great for her physically, but also mentally and emotionally.

She’s moved past anxieties, she’s learned how to wait her turn and follow instructions, and just in general, she’s really challenged herself. It’s been such a fun 1.5 years! 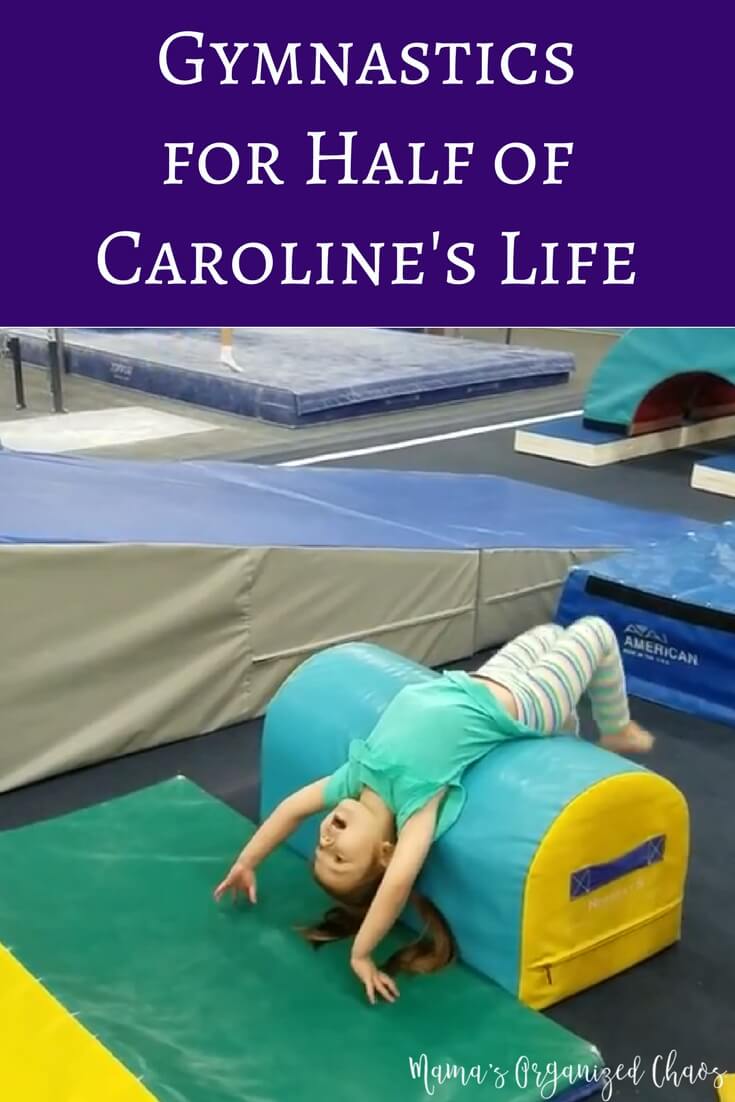