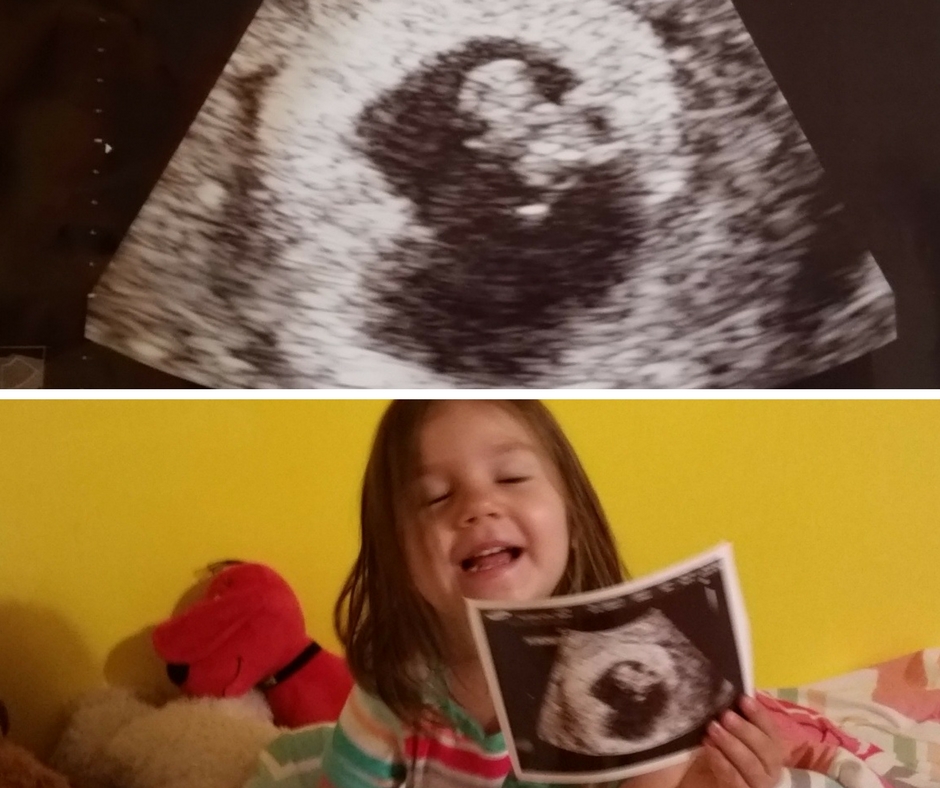 I was a day late for my period…we all know that doesn’t really count as late. I’d felt dizzy and just lacking energy the past couple of days, and I happened to have one of those super cheap pregnancy tests lying around from when we were trying to get pregnant the first time. “What the heck?”, I thought. “I’ll just check”. I knew it would come back negative, because it was highly unlikely I was pregnant, and it was also way early to even take the test. Even if I was pregnant, it was just really too soon to tell on one of these tests, so I went into the bathroom knowing for sure I’d see it come back negative.

A dark line appeared immediately. Again, I figured it must be the control line. I looked at my phone to time the test, and by the time I’d looked back there were 2 dark lines! It was as positive as it gets and I couldn’t believe my eyes. I wasn’t prepared in any way to see that positive line show up! I was thrilled and in complete shock!

As many of you know, I had to undergo fertility treatments to get pregnant with Caroline. We tried for a year and a half. After an exploratory laparoscopy, clomid, hormone injections in my stomach (that I had to do myself), and an IUI, I finally became pregnant! It was a long road (you can read about the whole journey here), and I was fully expecting for our second journey to take just as long. I’d heard the stories of people getting pregnant easier the second time, but never truly believed it would happen for us.

Still, we went into this trying to time both ends carefully- we wanted to make sure we didn’t wait too long to try, in case it did take a long time again, but we also wanted to be ready for it to happen immediately if we ended up getting lucky!

Well, we got lucky! Without trying at all, I got pregnant 2 months after getting off of birth control pills (and during the first month we were careful not to get pregnant, since I was on medication that wouldn’t be good during pregnancy). So really, the first month we allowed it to happen- IT DID!

I stared at the pregnancy test in disbelief, and complete happiness. I ran upstairs to tell my husband. As I entered Caroline’s room, I took one look at my husband and suddenly had the wind knocked out of me. I couldn’t find words, and the tears just started flowing. They were happy tears, of course, but he didn’t know that and neither did Caroline. My husband didn’t even know I was taking the test! So, of course, I scared everyone half to death, until I finally found the words- “I’m pregnant!”.

My husband was just as shocked as I was. I think he said “WOW!”, then a long pause… “OK!”. I could tell he was super excited as well, but he definitely then made sure to get out the words explaining that he was really excited, just shocked. I knew exactly what he meant. Neither one of us was expecting this, and we were both THRILLED that we didn’t have to go through the long fertility journey again. So much stress was instantly lifted when we found out this wonderful news. No forced, planned sex, no testing, no surgeries, no injections in my stomach, no doctor visits to the fertility center- nothing. Just a wonderful baby growing in my belly already!!!

We found out on the 22nd of April, and on the 23rd we went to the store to buy another pregnancy test…just to be sure. The one I’d used was actually expired in 2015! Once we had confirmation, we immediately called our families to tell them the exciting news. That Monday, I was on the phone with the OB and had an appointment scheduled that Wednesday. They did the usual first visit stuff: pap, urine sample, and blood work. My hcg levels came back at 5000! Definitely pregnant!

The next week (5/2) I went in for my first ultrasound. We weren’t entirely sure how far along I was, and since the home test was SOOO dark, the OB thought it would be a good idea to come in early just in case I was further along. We didn’t see much at the ultrasound, but the gestational sac was well formed and looking like it was in a great location. We could see the yolk sac as well, and the hint of a fetal pole. No heartbeat detectable yet. According to the sizing on the ultrasound, I was 5 weeks and 5 days, which matched perfectly to the date of the first day of my last menstrual period. We re-ran hcg levels just to take another look.

It sounds like the slow rising hcg levels really aren’t an issue when coupled with the fact that I had such a great looking ultrasound at 5 weeks 5 days. I always like when I get to go in for ultrasounds a lot, so I am looking forward to our playing it cautious plan of me going in again next week!

I am also considered a high risk pregnancy…again. This time, it’s not for cholestasis (although this is something to watch for in my second pregnancy), but for antiphospholipid syndrome. Just a fluke that my rheumatologist found on labs, but it puts me at risk for a miscarriage. I’m on low dose aspirin as a result for the entire pregnancy, and will see a high risk specialist probably in the first trimester after we get more information from my next ultrasound.

I’ve now gone in for the second ultrasound, and everything looks great! I heard the heartbeat and saw my little blueberry. Still right on track for the December 28th due date, and I’m a little over 7 weeks along as of today! No need to retest hcg levels since the ultrasound looked so good. I go in tomorrow (5/16) to visit with the high risk specialist to see what all we’ll need to do on that end of things.

So, aside from all the technical updates above, I am just SUPER THRILLED to announce another Baby Villegas on the way!!!

Caroline has a slight grasp of what is going on, thanks to the Daniel Tiger episodes with Baby Margaret being in Mama Tiger’s belly and then entering the world, so we talk about what’s going on a lot and relate it to the show. After I had announced the news to her and Daddy, I talked with her the next morning and asked her one question: “Caroline, are you excited to be a big sister?” “I don’t know yet”, she said, “I’ll have to wait and see.” Oh how I loved this answer. Fair enough my smart girl, fair enough! 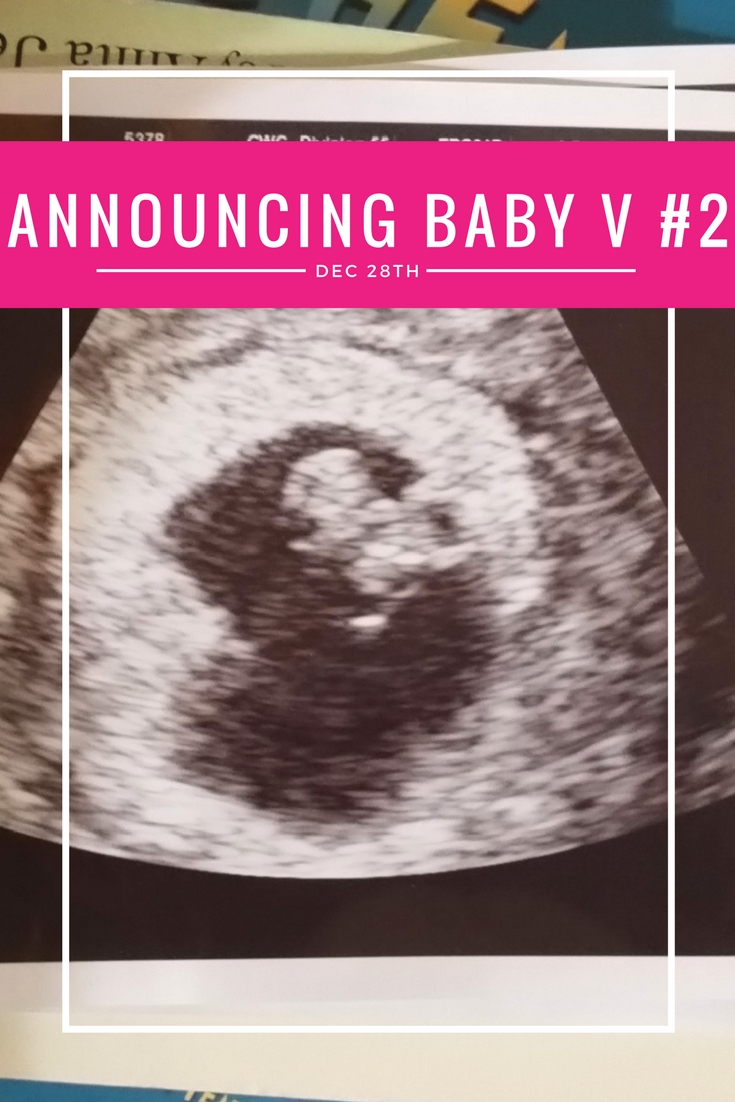