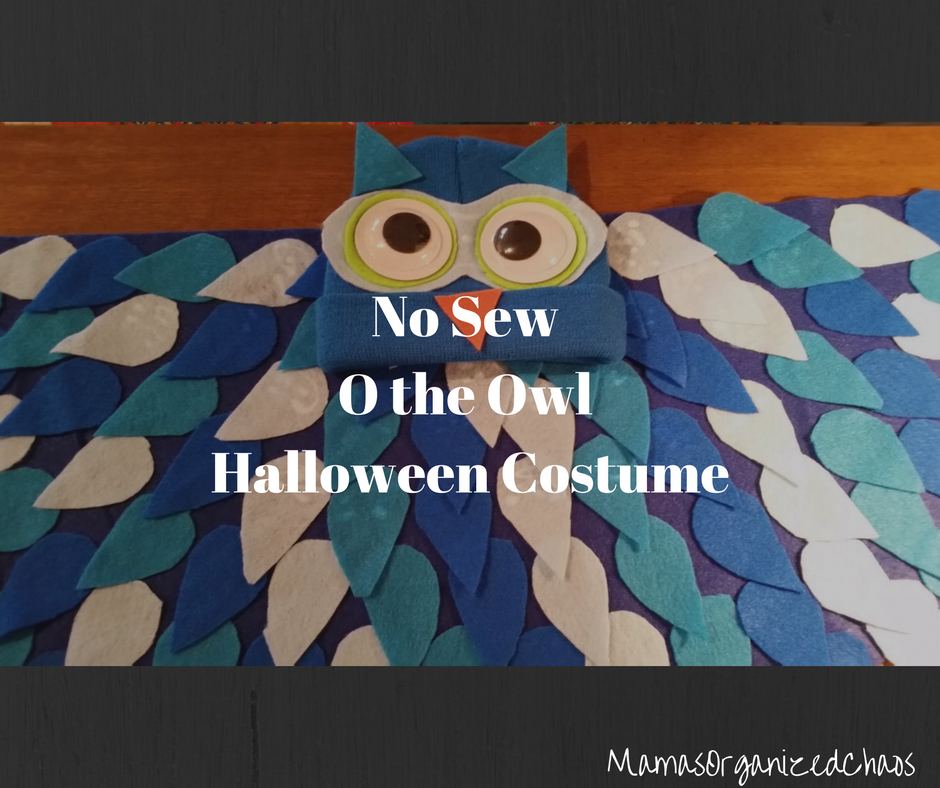 Sewing is not something that comes very easy for me. I don’t have the patience to do it well. I can figure out a basic pattern if need be, and I can do a decent job, but the reality is that I prefer the no sew route! Especially for something that is going to be worn ONCE…maybe twice?!?

Halloween is also not a favorite holiday of mine. I am trying to get excited about it, however, now that I have an almost 2 year old that is going to love it!

So, when I was thinking of what costume to get her, I knew I didn’t want to spend an arm and a leg (or spend an enormous amount of time creating something), that she was going to wear once.

Her favorite characters right now are Elmo, Daniel Tiger, and O the Owl (from Daniel Tiger). A mom can only take sooo much Elmo haha, and this girl really loves owls. So, I thought it would fun to make a simple owl costume for her.

I browsed Pinterest, and came up with zero O the Owl costumes. I ended up just searching for “toddler owl costumes” and found a few pictures that inspired me! I will admit, I never actually click on the links for things like this… recipes yes, costumes no LOL!

My first challenge was to find Caroline something blue to wear. I needed a blue shirt, blue pants, and a blue ski hat. I searched online and had no luck. I finally found a blue sweatsuit

in the boys section at Target. I also found the blue ski

hat there! I hope it’s no too hot of an evening come October 31st!

. I got a few different colors of blue, and also got 1 sheet of green for O’s eyes, and 1 sheet of orange felt for the beak. 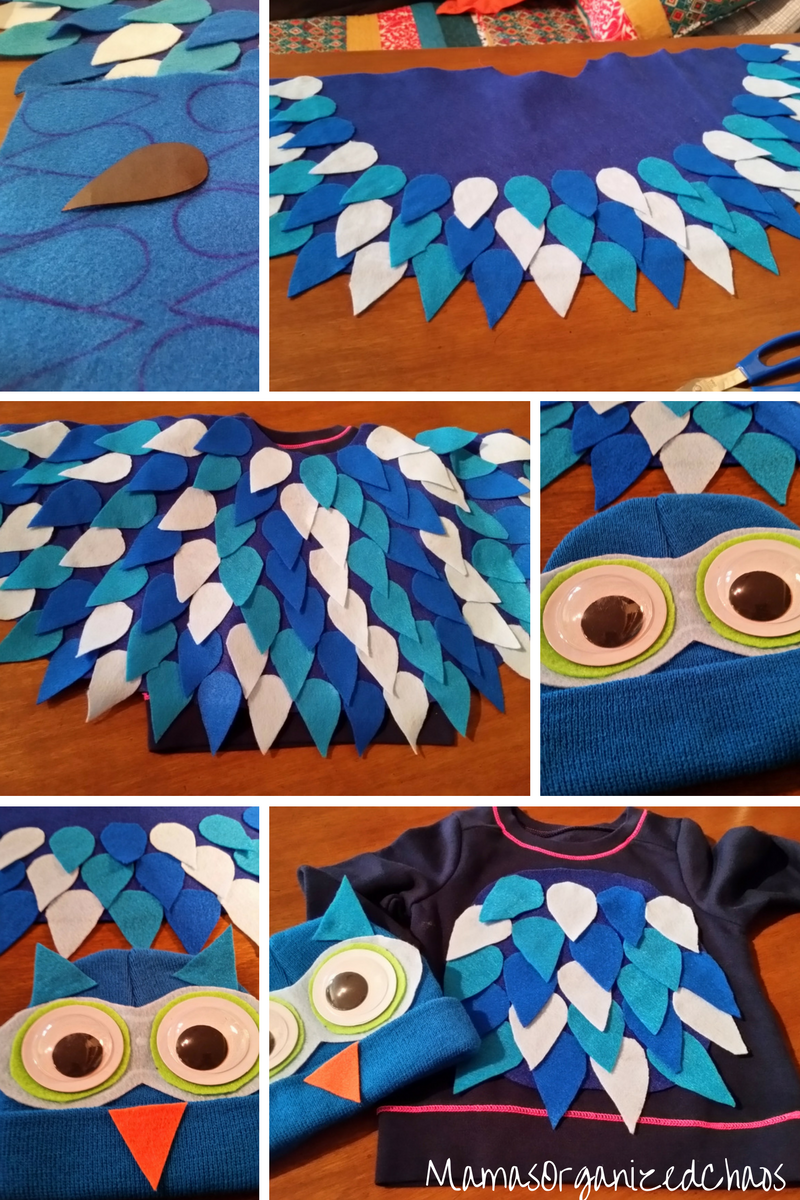 The next step was to cut a semi-circle of felt for the “wings”. I am attaching this to her arms (I may choose to sew this part once I see how sturdy it is with the liquid stitch).

I simply laid out her sweatshirt (arms out), and marked the sides of the felt to be the length of her arms. I drew a rough sketch of a semi circle that would reach down to the bottom of the shirt, and cut it out.

Then, it was literally just a matter of deciding on a feather size, cutting a template, tracing it onto the felt and cutting pieces out. To save time, I layered 3 sheets of felt and cut through all three at the same time.

As the feathers were cut, I arranged them on the wing piece, along with the stomach of the sweatshirt. Then I glued the top portion of each feather down with liquid stitch. I left the bottom of each feather unglued so it has some movement to it.

The wings (semi circle of fabric) was sewn to the sweatshirt at the neck, and then at the wrists. I didn’t want to bother hand sewing all the way down the arm, and this should work fine!

The hat I totally free-formed as well. No measurements or anything. I just cut figure eights for the eyes after making sure it would be larger than the eyeballs

I’d found at Michael’s to glue down. A couple of triangles for ears, and a triangle for the beak and all was complete!

I can’t wait to see this actually ON Caroline! Turned out great, and it was super easy! I made this in a total of a few hours. The most length part was simply cutting the feathers! Turns out it was nice and relaxing with some music on, while Caroline was away at school 🙂

UPDATE: Oh my gosh, I LOOOOOVE how this costume came out! We had a couple of feathers fall off (didn’t seem to have enough glue on them), but otherwise it stood up pretty well.

I’ll be gluing them back on and saving this for another use some day. Caroline looked adorable! Read all about how Halloween went with our 24 month old here! 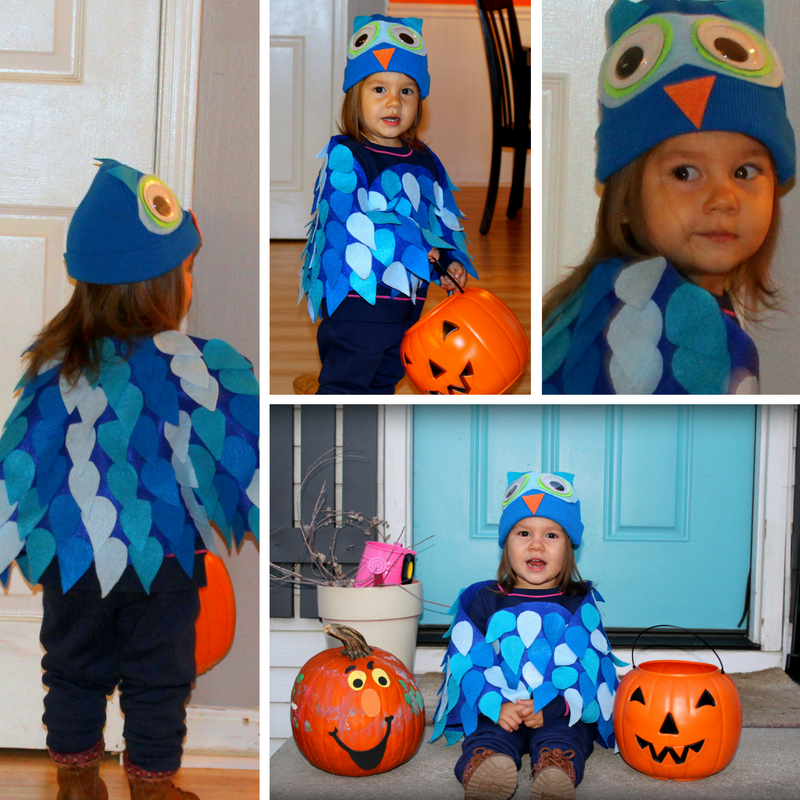