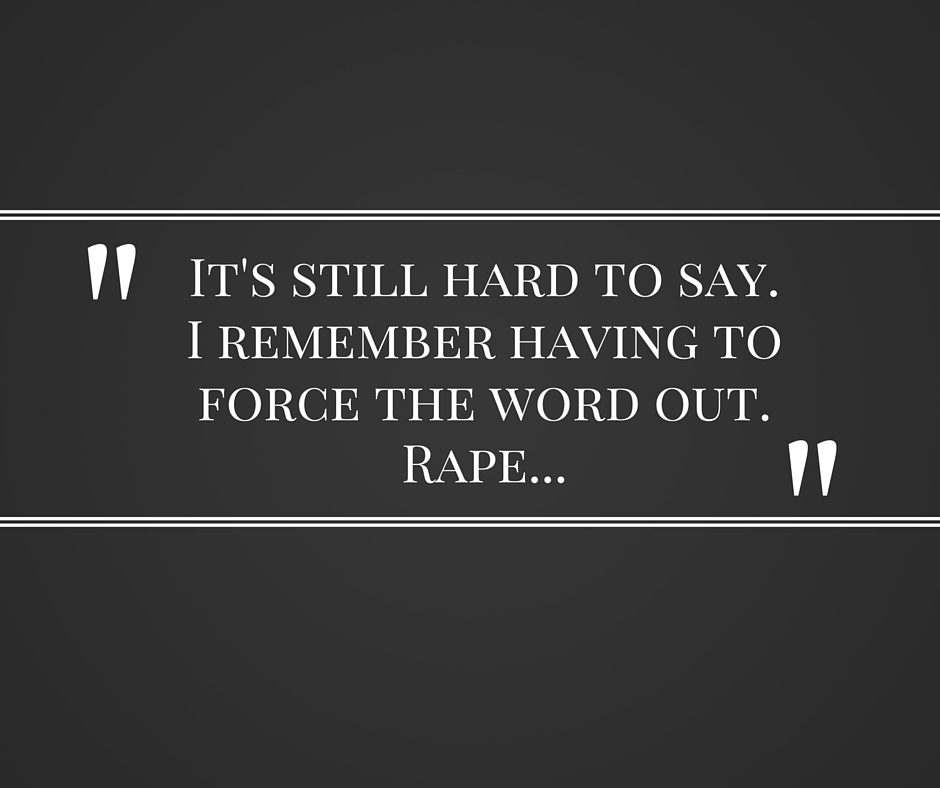 Over the past few days my Facebook feed has been inundated with posts about the Stanford rape. I couldn’t stand to read the details and tried to avoid it. His name and his face are plastered in my mind, however, just from reading the titles. So the instant I saw a post about the two heroes, I read that and shared that. Those were the faces I wanted to see. In that article I read a horrifying account of what had happened. I then intentionally searched, not for the rapist’s statements, not for his father’s disgusting words, but for the victim’s letter. The warrior. It was her words that I wanted to read (if anything). I mustered up the courage and read those 12 pages last night.

My friend said it best today: “I hate that statistics bind us together in a way they never should”. Yes, this. My stomach was in knots last night as I read this womans thoughts. I was reminded of my own feelings. Feelings that over the last 13 years I’ve finally managed to push out of my life (for the most part). Feelings that make me want to crawl in a hole and never come out. I felt like I was reliving my experience from 13 years ago.

It’s still hard to say. I remember having to force the word out. Rape. If I had to tell the story (which I
felt I had to inform my parents, and the police right away), I often told it without the actual word. I often insinuated what happened. I couldn’t get the word out. It seemed unreal. People got the point if I said “He drugged me and ____”. Most people could fill in the blank without me saying it. And for that I was grateful.

I didn’t remember it until a couple of days later. My roommate said I’d gotten home somehow and slept for hours. I don’t remember how long. I woke up a bit confused. Then it happened- I started getting flashbacks of the night. The horrifying details came to light. I think I was driving when I officially realized what had truly happened. I called my mom.

Everything is a blur, except the next part. The part where I go to the police station to report it. The part where they make me announce why I’m there in the tiniest lobby I’ve ever been in, where other people can hear me. I was so embarrassed. I remember the part where I had to say his name. I knew him. We’d been friends and study partners for a year. His name is forever stuck in the pit of my stomach. I remember the part where I had to answer question after question to file my report. I had to account every gruesome detail in front  of my parents. I had to answer the question “what were you wearing?”. I remember them having me call him on a recorded line. I was trembling and my heart was racing. He didn’t answer. His friends wouldn’t answer. They all knew better. I remember the police gathering statements from them and reading me those statements. I remember that this asshole and all of his friends made up lies about my character. They made up stories of me coming over and taking off my clothes and masturbating in front of them- so obviously I wanted what happened that night. Their stories all matched- so it was their words against mine. I had to hear their awful stories sitting next to my parents. I felt embarrassed and horrified because of false statements.  I remember having to give my clothing and my underwear to the police station. I never had a rape kit done at a hospital because by the time the flashbacks started coming, it was too late. So, they tested my clothes for DNA. Except he took the time to use a condom- so there was no evidence. And the drugs were out of my system by the time I realized what happened. So there was no proof there either. I remember what he made me do to him, and what he did to me as he propped me up because I was so limp. I remember. And I remember the University that I attended being unable to do anything because there was no evidence.

His name and his face make my whole body hurt. November 1st and anything to do with Halloween makes me cringe. I’m finally able to enjoy the day, 13 years later with my daughter and husband. But  it’s still there in the back of my mind- always.

I remember trying to piece myself back together. Trying to live my life with strength so he didn’t win. Except he was there. I literally had to see him on campus and around town. I felt alone and scared. I kept driving to my favorite coffee shop where I used to study. I’d sit in the parking lot, because I knew he might be there. I’d eventually drive away. Finally, I got the courage to go in. He was there. I wanted to run, scream, hide, and so much more. I had to walk past him to get in line. I just kept hoping I’d made him as uncomfortable as he made me, and that he saw that I was living. I was strong. I was not letting him win. I ordered my coffee and sat. I pretended to study as I died inside and couldn’t move.

I hate that I relived all of this last night. I hate that reporting this crime is so difficult on the victim. I hate that nothing happens to the assholes that have taken a piece of us. I hate that it takes a decade to feel normal, and that it can all get brought up so easily and so quickly at any time. I hate the control he still has over me. I hate that it’s taken me 13 years to get the balls to actually (kind of) tell my story. I’ve told it only to the people that needed to hear it. I’ve cringed every time I’ve said it. I hate that nothing happened to him other than a tiny blimp on his record. At least, if someone else ever reports him for something like this, it will be more likely to stand in our justice system and have consequences for him.

I hate that I feel ashamed about what happened- because I shouldn’t. I hate that I was responsible and this still happened. I was the girl that only went to parties to look after my girlfriends. I was the girl that refused to go to parties and drink if there were people there I didn’t know. I was the girl that only went to a Halloween party because I’d known these guys for 1 full year and thought I could trust them. It happened regardless of how careful I was . That’s the scary part for me when I think about my daughter. No matter how many tools I give her, or how responsible I teach her to be- it can still happen.

I am so glad that this woman has escaped the media somehow. I honestly don’t even know how that’s been possible in today’s technology driven world. I am thankful for that. I know we’d all love to lift her up, but I can’t imagine how difficult it would be for her to be in the spotlight. I am thankful that somehow people have respected her privacy. And I am so terribly sorry that any woman ever has to go through this.