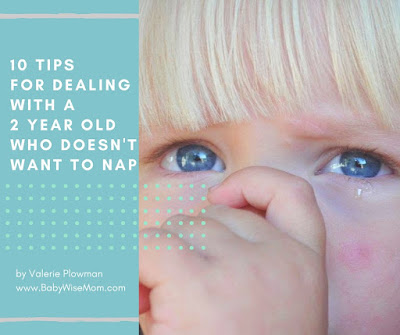 We have a wonderful guest post today. Valerie from the Babywise Friendly Blog Network is sharing some great ideas on how to deal with a 2 year old that isn’t wanting to nap. I think #3 is so very important. It is something we are struggling with at the moment. Getting in enough mental and physical stimulation is a difficult task some days, but is very essential!

I’m guest posting today over at Wiley Adventures. Our 2 year old is really resisting room time, so we’ve implemented “table time”. Check out my post: 8 independent table activities for 2 year olds. Let me know what other ideas you have for table time fun!

“You are so lucky your three year old still naps! As soon as my child hit two, he refused to take naps anymore.” I have heard this comment many, many times over my years of parenting. Here is the thing. Most two year olds are going to reply, “Thanks, but no thanks” when you say “Time for nap!” It is rare to have a child who loves sleep so much that at age two, he/she will skip on in at nap time. Those children exist, yes. I have had one.

Most children, however, can easily think of 100 things they would rather be doing with that time than napping. But you are the parent. This is a moment that you act like the adult in the relationship and insist upon what is best for your child.

As most things in parenting, when you take a stand, your child isn’t going to suddenly say, “You know, you are right. I don’t know what I was thinking. I will do what you say. THANK YOU so much for helping me see the right path.” No, these moments are often met with tears. Tears don’t mean you are doing it wrong.

So how do you deal with a two year old who doesn’t want to nap?

Have nap time even if (when) she balks at the idea. Nap time is nap time, even if your child isn’t excited. When Brayden, my oldest, turned two, I also had a 6 week old. My best way to manage a newborn and a fresh two year old was to have complete consistency. Brayden didn’t love nap time as a two year old. He wanted to play. He would often cry on his way to his room when I told him it was time for nap, but he knew that nap time meant nap time. His crying was out of disappointment, not out of trying to get me to change my mind. He knew better.

Have your daily routine consistent. Have the order of events leading up to nap time consistent so your two year old can anticipate and know with assurance that nap is coming up. Two year olds can’t tell time, so consistency is what they have to hold on to.

Most children do much better with a warning that change is approaching. “In five minutes, it will be time to clean up and get ready for nap time!” Bonus if you add on “Say yes Mommy!” and get a “Yes Mommy” in response.

I will add a caveat. Most children do very well with a warning, but for some, it just ruins that last five minutes. I have one child for whom the five minute warning was a major bust. She preferred to just be told it was time. So try the warning, but if it doesn’t work, stop doing it.

If you want nap time to go smoother, you need to have plenty of exercise and mental stimulation during the morning hours. Do not overlook the importance of mental stimulation. The two year old will be much more likely to sleep if there has been enough stimulation before the nap. This doesn’t mean you need to spend every minute with your child to stimulate properly. But have learning time scheduled in to your mornings. Have something each day that requires movement from your toddler. This doesn’t necessarily mean that your toddler will be happy to go to nap, but it will mean that once your toddler is there, she will be more likely to sleep at nap. And I will say that when I was consistent with our learning time, Brinley was much happier about going to nap.

It is hard to stop doing something you love to go do something you don’t love. Think of yourself at bedtime. Would you like it if someone came along and dictated when you had to stop doing what you were doing before bed and made you go right then? Probably not. That doesn’t mean you don’t enforce nap time or that you let your toddler decide when nap time starts, but have patience with your little one. It isn’t abnormal for your toddler to be upset to start nap. It doesn’t mean she is spoiled or that she is someone doomed with a bad attitude. It means she is a human who is disappointed and hasn’t learned how to deal with those emotions yet. “I know you are sad it is nap time! I know you want to keep working on your puzzle. I will leave the puzzle right here and you can do it after nap time.”

5-Have a Consistent Nap Routine

Have a nap routine that you can do consistently. When I had a two year old and a newborn (it happened a couple of times), our nap routines were short and sweet. I needed to be able to put that two year old down for nap quickly if (when) the newborn woke up earlier than I expected. With my fourth child, my youngest, I was able to have a longer nap routine because she didn’t have siblings who couldn’t wait for things. Have something consistent for a nap routine and something you can do each time.

6-Tell Your Child She Can’t Have a Fit

You start with the empathy, but you work toward no fits. Occasional disappointed crying? I can do that. Daily fit because it is nap time? Not okay with me. This became my fourth child. She did not want to have a nap, and she sobbed each day when I told her it was time for nap. I gave her the empathy and time to get over it, but after a while, I finally told her, “Brinley, you are not allowed to cry when I tell you it is time for a nap. I understand you are sad, and it is okay to be sad, but it isn’t okay to throw a bit fit about it.” That worked for her. Not all kids are going to respond to just telling them they can’t cry, but it is so worth a try!

DON’T DO IT! When your two year old declares through tears she doesn’t want a nap, do not say, “Okay. What should we do instead?” Nope. Nap still happens. If you are willing to go no nap, do not tell your child she is taking one. 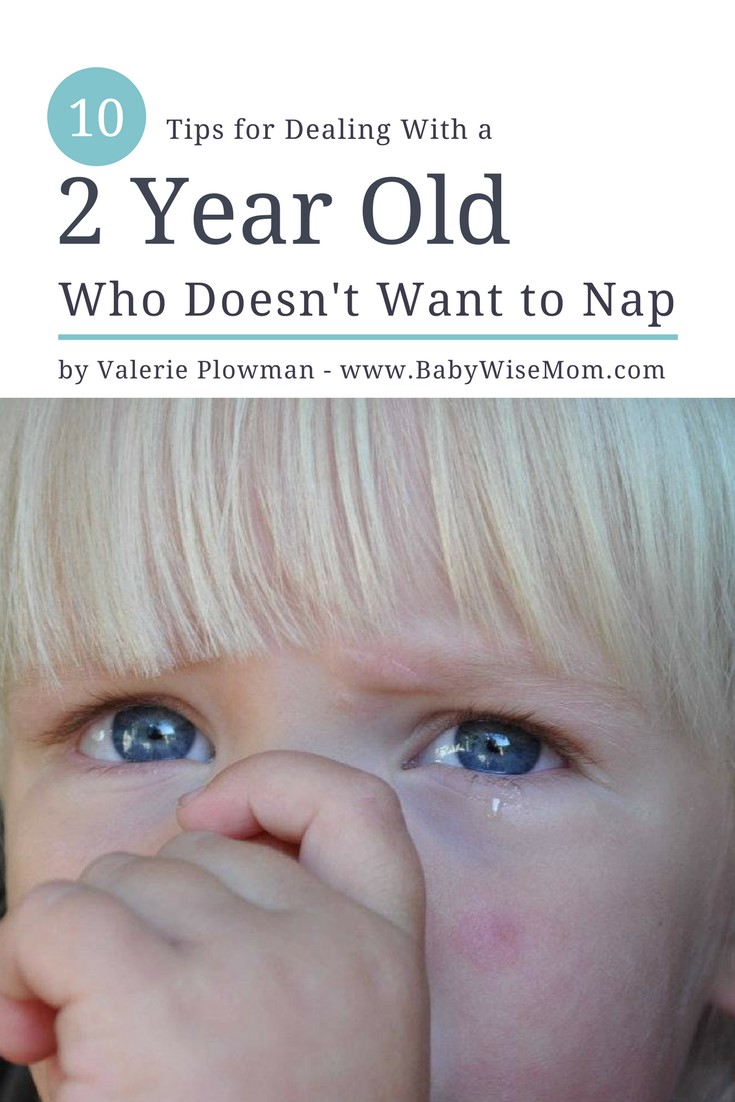 8-Have Consequences for Fits

Some children just cry a little before every nap. They just need to blow some steam. Be conscious of this. There is a difference between being so upset that tears will fall (some people are just criers) and being upset and letting a huge fit erupt.

10-Know It Is Normal To Not Always Sleep

Two year olds won’t always sleep for every nap. Some will, but most start to not nap every once in a while as two year olds and continue the trend and frequency as they get older. This is all normal! Still have nap time, though. You might shorten it if you like when you realize that day is a “no sleep” day (and you will likely need an earlier bedtime that day because of it). Just know it is all normal and nothing to stress about. This is your early step of moving toward rest time.

When Brinley started her fits before naps stage, I had many days I wanted to throw the towel in on nap time. My day would have been much more pleasant without the nap battle in it! She was my fourth, however, and I knew it was worth the battle to persevere and end with a happy napper moving on to rest time in our future days. She is now 4.5 and takes rest time each day. We are able to have that daily break still because I pushed through and stuck to nap time. It was never about luck. It was about consistency that paid off. 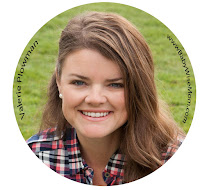