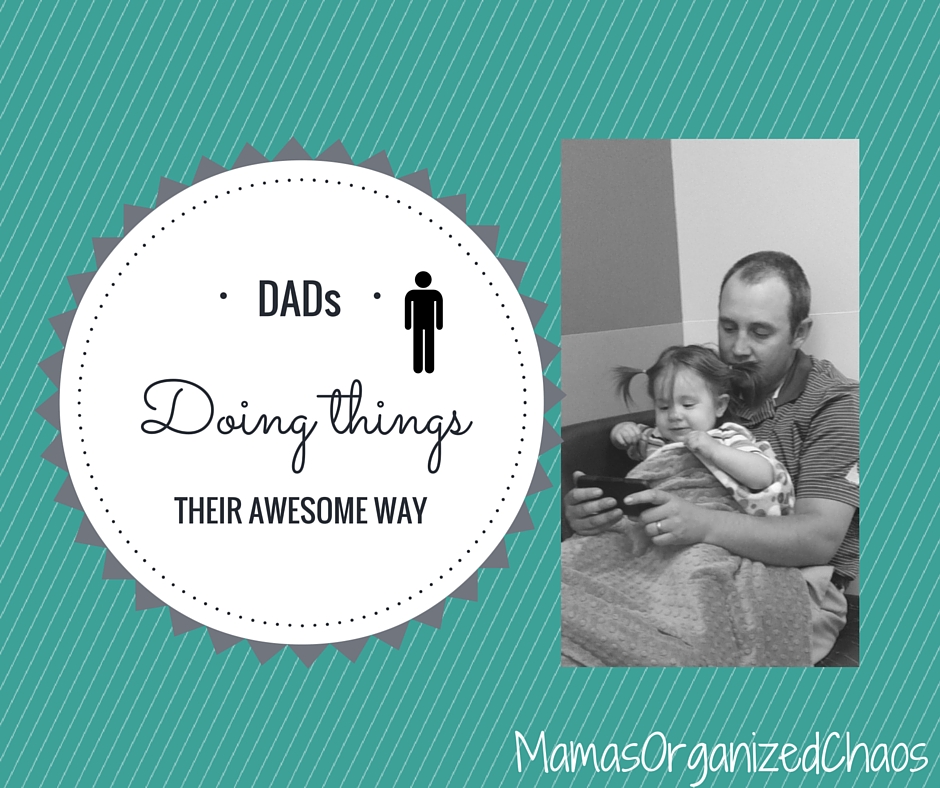 This post originally appeared as a guest post at Team Cartwright. Team Cartwright is one of the amazing blogs in the Babywise Friendly Blog Network. Check her blog out when you get the chance!

Here’s the thing about dads. There are those that stand mostly on the sidelines, and there are those that jump in and parent wholeheartedly. Often, they end up getting criticized no matter which path they choose. Either they don’t do enough, or the things they do aren’t done “correctly”. When this happens, a lot of dads end up backing off and defaulting to mama as the go to parent (and not doing enough). It is a viscous cycle! The thing is, though… dads don’t do things incorrectly. They just do them differently than mama. And that’s ok.

My husband is pretty hands on. Our daughter is almost 1.5 years old now. He often tells me that things came more natural for me with regards to parenting. Maybe, maybe not. The real reason that I seem to “know what I am doing”, however, is that I do it 24-7. It is my job and my entire life! He goes to work and catches up on the whole parenting thing in the evenings.

As moms, we all know that things change on a daily basis (what works and what doesn’t), and that we’ve had all day and all week to figure out the best way to do things. So, it is with good intentions that, when our husbands come home from work, we mention to them what “works”. They are often glad to get the headlines so they can feel like they know what they are doing. The reality, however, is that they do know what they are doing. Sometimes we just need to let them parent and figure it out.

Some things need to be consistent- the rules and boundaries. These things should be discussed as a couple so that both parents agree and are on the same page.

Other things can be done differently at different times. They way in which we bathe our children, get them dressed, what we do before nap time, how we play with a certain toy, the feeding process, the outfit selection, etc. All of these things and many, many others are what I’d refer to as the fluid parts of the day. If dad does them one way, and mama does them another- all will be ok in the world!

Dads need to feel a sense of ownership in order to feel that they also “know what they are doing”. Things come natural to them as well, but often times they don’t have as much time to figure things out before mama steps in. And, if you have an “expert” in the room…why not default to them? It’s easy for dads to default to us and trust us. We married these men, however, because we know they are smart an capable. So, we need to let them problem solve and do things differently. Men are usually pretty good problem solvers!

My husband brought this up to me one evening as we were discussing this whole parenting thing. I was upset because, in the moment, I felt like he wasn’t stepping up enough. Here’s what happened:

He was going to give our daughter a bath. He asked her to come several times, and she wasn’t listening. I was staying in the other room letting him deal with the situation. I waited. Nothing new happened. Then she came over to mama, so I got involved. I told her to go to daddy to take her bath. Since she’d already been asked several times, when she didn’t listen I simply picked her up, brought her in the bathroom, got her undressed and put her in the bath. I was upset, because now I was doing the bath and I felt like my husband hadn’t stepped up.

He later explained to me that he really was going to come get her. He was giving her a chance to come back. That chance was just longer than what I would have allowed. It was the same tactic that I would have used. I just wouldn’t have (and didn’t) let it go on as long. The reality is that we use the same parenting styles (which is an important part of being consistent). It would have been alright, in that situation, for my husband to wait a little bit longer before coming to get her. I didn’t recognize this in the moment, however.

He later read an article about how dads to things differently, but not incorrectly. He sent me the article to read. Here is the link in case you are also interested to read it! All I could think of was that he is an amazing dad. He is hands on. He does step up. He tries and he does SO well! I feel like I am pretty hands off when he’s dealing with things. I don’t feel like I am the mom that tells dad how to do things. Unfortunately, I do it enough that he notices it and it bothers him at times. I was so glad that he told me, because I never want to make him feel like he is doing things wrong.

So, it is with a conscious effort that I now take a backseat on purpose at times. I want him to see that I trust him. I want him to see how amazing he is with our daughter. I want him to feel like he knows what he is doing- because he does. He just doesn’t know the exact way I would do it! No one would (but me)! It’s a pretty tall order to expect someone to do things just like you do them. So, even though I thought I was good at this, I was told (and also realized) that I am not as good as I thought or want to be! Most of us mamas can probably improve in this area and let the reigns go a bit. Not to mention we could probably learn a thing or two from our amazing husbands as well!