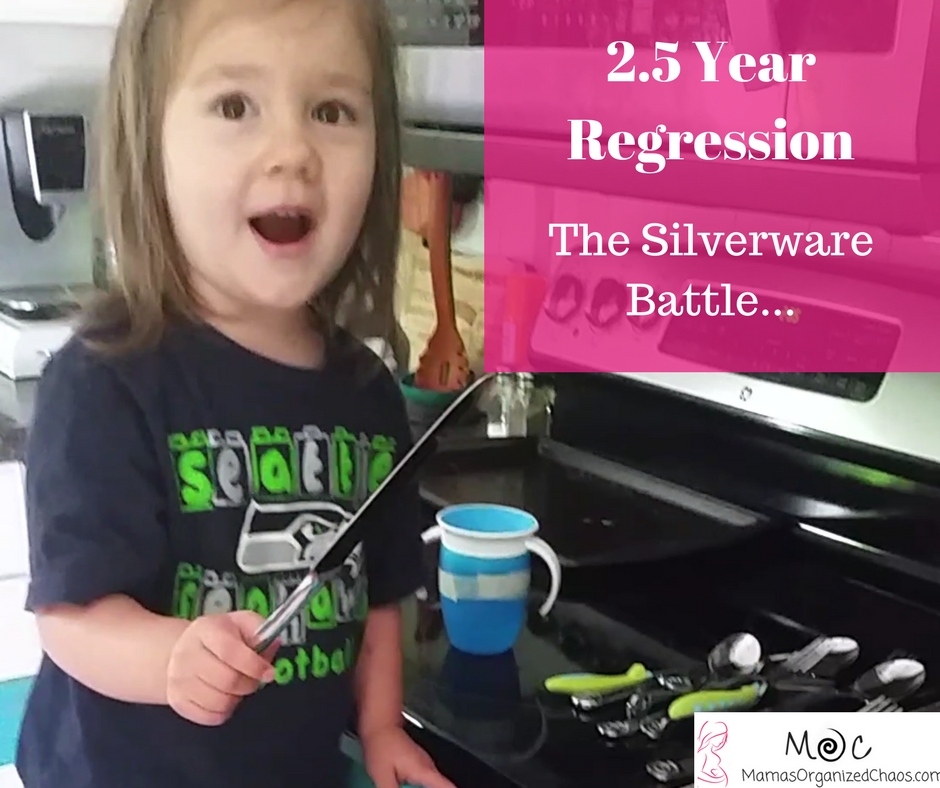 Yesterday I wrote about some behavioral problems that have been getting worse over the last couple of weeks. They seem to really be magnified right now, and I am feeling at a loss as to what else to try with Caroline. Read all about the issues we are encountering, and my current tactics in this 2.5 Year Behavioral Regression post.

As I was writing the post, I realized that approximately 2 weeks ago was when we told Caroline that Mama was pregnant and she was going to become a big sister. I noted in the post that she’d been pretending to be a baby a lot more lately, and doing lots of crying and whining. While, I thought it was highly unlikely that it would be happening now, I know that many older siblings regress a bit when the new baby arrives. It is common for the older sibling to mimic the crying and whining that they see the baby do, and to really act out in an attempt to gain the attention back towards them. Our baby has not arrived yet and is simply an idea in Caroline’s mind… so I figured there was no way she was having this regression now. Well… I dug a little deeper, and made some discoveries.

We also came to a closure yesterday on the silverware issue, so I figured I’d give an update on that as well (video included as well)!

Caroline had gone to bed already, and then asked to get up and go potty. We have some of our best conversations while on the potty, so as she was sitting on the potty, I decided to inquire… “Caroline, are you worried about the baby?”. She put her head down, sighed, and said “I am worried, Mama”. So, I asked why she was worried. A flood of information came out of my little 2.5 year old. I was both shocked and amazed.

– Caroline started by saying she was worried the baby was going to take her toys and play with her stuff. She also told me how she’d handle it: she said she’d give the baby a toy that she didn’t want to play with.

– She then told me she was worried about the baby touching her. She said she’d have to go somewhere else and find something else to do, so the baby wouldn’t touch her. Caroline said she’d just go to her room and do her puzzles if the baby was bothering her.

– She also told me she was worried the baby would cry and be loud, and that it would bother her.

– And finally, she told me that she was sad that she wouldn’t be able to read to the baby since she’s a “bad reader”.

Wow. Just wow. First, I am in total awe that my 2.5 year old is recognizing all of her emotions and able to express them so well. Second, I am amazed at her ability to problem solve and identify how she’ll handle each scenario above. Third, my 2.5 year old really wants to learn to read, so I guess this Mama needs to get on that! It breaks my heart that she thinks she’s a “bad reader”….(not the first time she’s mentioned this). I have no idea where she even got that idea, poor thing! Fourth, WHAAAT!?! The baby is not here yet! How is my little girl already so worried about all of this!?

We had a great conversation about all of the exciting things that will come with a new baby. I also told her how I would help manage all of the above issues. I tried to reassure her that Mama is fully aware of all of these things, and that I promise to minimize the impact on Caroline as much as I can. I tried to explain how things will be different, but that we’ll still have our time together as well. This conversation opened up so many topics, and I am just so glad she opened up to me with all of her concerns.

I also have to give a huge shout out to none other than…. Daniel Tiger! Caroline is recognizing her emotions, and identifying her real life scenario with that of Daniel Tiger and his little sister, Baby Margaret. She got all of her worries, and all of her ideas on how to handle the situations from this show, and it is very obvious to me that she learned a great deal from it. She’s applying what she sees in the show to her own life, as she’s done on countless occasions. Daniel Tiger is always in our back pockets, and I just love that she identifies with the show so much. She practices calming techniques that she learned on Daniel Tiger, she plays out interactions with her “friends” based on scenarios from Daniel Tiger, and now she’s thinking ahead to how her life is about to change…all due to Daniel Tiger. This show is amazing!

I am so glad we had the conversation that we did, last night. Now I can address these worries of Caroline’s ahead of time and we have lots of time to prepare. It is always so helpful to know what’s going on in the amazing mind of hers!

Just a brief review of what our issue was yesterday and how I was handling it with Caroline (for the full info see this post):

She walked into the kitchen, and with a little more interaction and help from me that I am usually able to give in the mornings, she put it away! I praised her for making a good choice, and we continued on with our afternoon, finally getting to actually do something! We went for a lovely walk and went to a playground.

On the way back, she insisted on carrying everything on her own- her water cup, my water bottle, two sticks and a rock. She said “Mama I will carry everything. It will make you feel better. I can do it all by myself”. She huffed and puffed and rearranged things in her hands all the way home….But she refused to let me help. She is such a thoughtful little girl, and so sweet.

Later that evening, we had a few more moments of not listening, and some tears here and there, but all were short lived. At the dinner table, Caroline said. “Mama are you still sad at me?”. I told her I wasn’t and asked if she was still sad. “No I’m not sad, Mama. I’ll never stay sad at you. I promise.”
Oh how I love that she listens and takes my words to heart!

Caroline is amazing at letting things go. As soon as the fit is over, and we apologize, she’s forgotten everything and moved on. She bounces right back and is as happy as can be.

These moments are so trying. They are soooo difficult. I am also so lucky to have a little girl that is as in tune with her emotions as Caroline is. It feels like I have a 3.5/4 year old on my hands, not a 2.5 year old at times! She’s also very sensitive just like her Mama. Sometimes that means we’ll clash, but for the most part it means that we’ll understand one another and we’ll have great conversations about things. Caroline is really busy thinking to the future, she’s also really intent on testing her boundaries as hard as possible. Consistency is paying off. There are days like yesterday that it just doesn’t feel like we are making progress, but then the moment happens where the consistency pays off, the silverware gets put away, my daughter apologizes and listens, and then opens up about all of her worries. At the end of the day, she knows what’s expected, and she knows we care and will always be here for her. So, while yesterday was really hard, it was a big win, with a lot of progress, and a lot of insight came from yesterdays struggles.

Did you know there is a 2 year old sleep regression!?

If you are struggling with a sleep regression at this age, here are some useful posts: 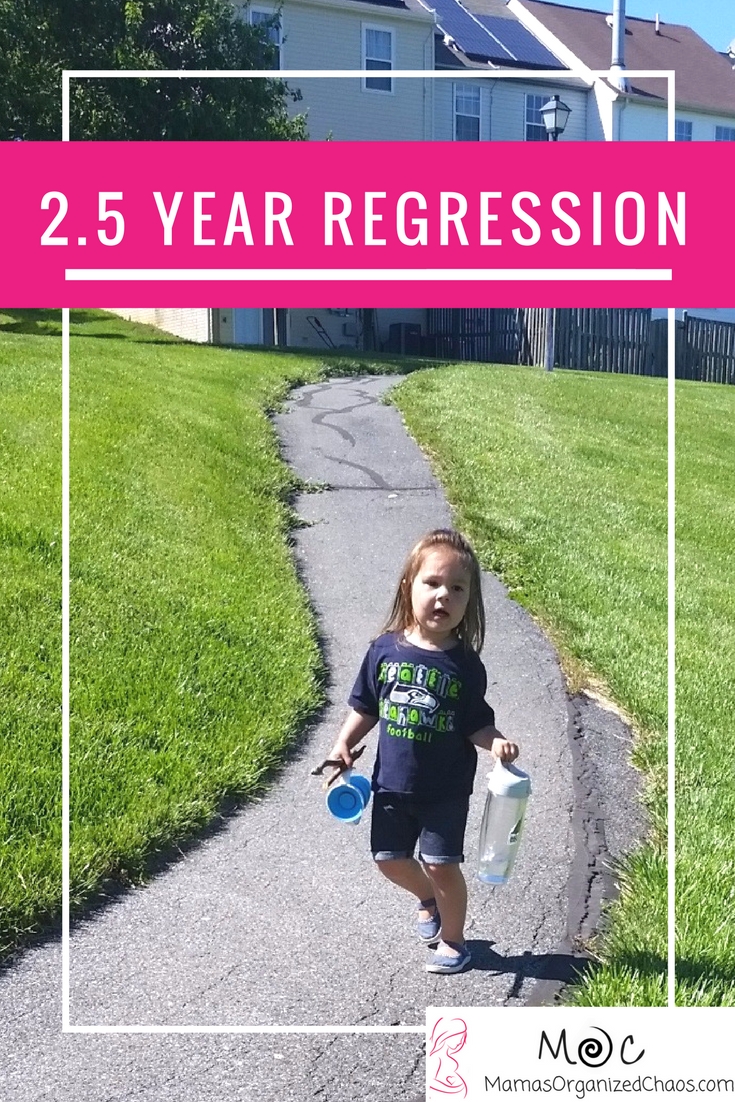