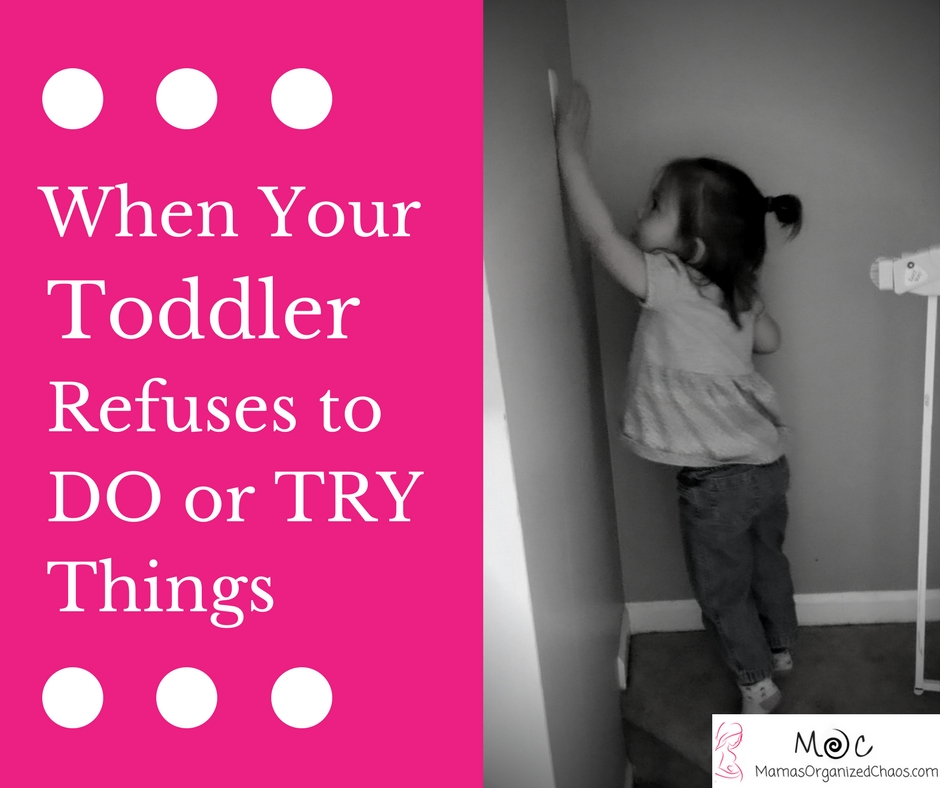 Today is a very special day! Kimberly over at Team Cartwright has teamed up with me for a topic day. We have a common issue in our houses… toddlers that don’t want to do things independently, or try new things. The interesting part, however, is that our toddlers do this in very different ways! As a result, we deal with it in different ways as well. Hop on over to Team Cartwright to see her post on encouraging independence in a reluctant child.  And, of course, you can read my post on what to do when your toddler refuses to do or try things, right here! Enjoy, and please chime in with your tactics as well! We’d love to hear from you in the comments of both of our blogs!

There are two types of toddlers in this world. The kind that like to do everything themselves, and the kind that avoid doing things on their own, if at all possible. Both types can be extremely frustrating to parents, in their own unique ways. The toddler that wants independence seems to move at a snails pace, and it takes forever to do things. The simple act of getting in the car can either feel like it’s taking an hour, or, if expedited by Mama, can turn into a fit of tears. And, of course, the toddler that hates to do things on their own, means that Mama gets stuck doing it all. There are times it is just not feasible, especially when you have other children that actually need the help.

We all have the same ultimate goal, however. We want to teach our toddlers how to do things and gain their independence in safe ways. We all want and strive for balance. Ideally, we help our toddlers on occasion, and they help themselves on occasion. Unfortunately, the toddler’s world and way of doing things isn’t always balanced!

My daughter is the independent type that loves to do things on her own. There’s a stipulation, however… she has to decide that it’s something she wants to do, and she has to feel comfortable doing it. She seems to only do things that she already knows she can do, and is stuck somewhere in the middle with not wanting to try new things, unless it’s her idea. For the most part, however, she’s the toddler that wants to do things on her own. She wants to climb into the car all by herself, get into the car seat, and do the buckle.

Her refusal to do things comes out in a couple of ways:

1. If it’s my idea for her to try something new – this usually results in a big fat NO on her end. If I insist, we can enter a pretty big and unwanted power struggle at a moments notice.

2. If she doesn’t feel ready- Caroline can have an interest in trying something, but if she knows she can’t yet do it PERFECTLY, she doesn’t want to do it. Doing something half-assed is not in her book. It’s like she rehearses things in her head until she knows she can do it perfectly, then decides that it’s time. She’s been doing this since she was a baby. It happened with sitting, standing, crawling, walking, and talking. She waited and waited to say words, but when they came out, they were spot on and she was talking a mile a minute! She’s an observer, and a bit of a perfectionist at times! She’s always liked practicing on her own prior to doing it in front of anyone.

3. Testing boundaries- One of the many ways Caroline likes to test boundaries, is to refuse to do something she already knows how to do. This type of refusal requires a different reaction, as I’ll explain below.

Getting Caroline to do things requires a mix of encouragement tactics and discipline. As you can see above, Caroline has a hard time trying new things, and needs to feel ready. This requires a much different approach than when Caroline suddenly refuses to listen and do something that she clearly knows how to do- we treat this as a discipline issue and enforce consequences.

The rest of these tactics are used when we are trying to get Caroline to try something new:

Waiting- If there is one thing I’ve learned from my daughter when it comes to her learning new things, it’s that I have to be patient and wait. Waiting is hard, and yet it ironically often feels like the easy route at the same time.

I fed Caroline like a little bird (placing food in her mouth) for what seemed like forever. I knew in my heart she just wasn’t ready to feed herself, and that making her attempt and practice on her own was going to frustrate her. So… I fed her. I felt guilty about it at the same time, because I knew she wasn’t practicing the new skill that I wanted her to learn. It also made things easy…there wasn’t a mess, and feeding got done quickly, since I was handling it. It was a mix of weird emotions for me, but I knew that when the time was right, we’d both know and move forward together.

This scenario has played out so many times, in so many ways. If Caroline isn’t ready to do the task, it is very apparent, and she makes it clear that she doesn’t yet want to do it. From everything to pulling her pants up, to brushing her teeth, Caroline and I both know that, when the time is right, she’ll come running out of the gates doing the task well and loving every minute of it. But, until then… we wait. We wait for signs of readiness, and signs of interest. Both of these requirements must be present for success to be had.

Encouragement & Explanation- If Caroline is only showing one of the above signs (readiness or interest), I start the encouragement process. We talk through HOW to do something, and why this task is in her interest to learn. I try to explain to Caroline the different steps required to complete the task, and relate it to other things she does well. I show her often.

Praise- When Caroline succeeds at even part of a task, we praise, praise, praise. We commend her for trying, for focusing, for attempting, and for working hard, in addition to her success. We remind her of her successes the next time around.

Break it down- Sometimes we choose too large of a task as parents. It fits in our brains as one task, so we leave as such. For example, the act of putting a shoe on or off…it doesn’t have to be one full task. It can be broken down into more manageable pieces. Maybe we start with the ability to do and undo the Velcro strap. From there maybe pulling the tongue of the shoe out of the way is the next achievable task. After that, it might be slipping the shoe on, with some assistance getting the heal of the tennis shoe pulled out. The next task might be identifying which foot a shoe goes on. It’s very helpful for children to provide them with small, manageable tasks that aren’t overwhelming. Breaking down one large task into smaller components can be the difference of a willing toddler or a toddler that is overwhelmed and refusing to try.

Breaking down the task is always one that I forget about, and it is perhaps the most useful tool we have. Caroline is very capable at this point of taking her pants off (if she’d only try). I know she’d be able to do it. She adamantly refuses, however. It wasn’t until I started making the process more manageable and less overwhelming to her that she’d even consider partaking. All I had to do was start the process. If I pull her pants down over her butt, she’ll attempt the rest of the process. It’s a compromise, but it’s giving her the confidence to tackle a new skill. So, while I know she’s ready, she doesn’t have the interest yet. Her interest will come with confidence, however, and breaking down the task will build that confidence. 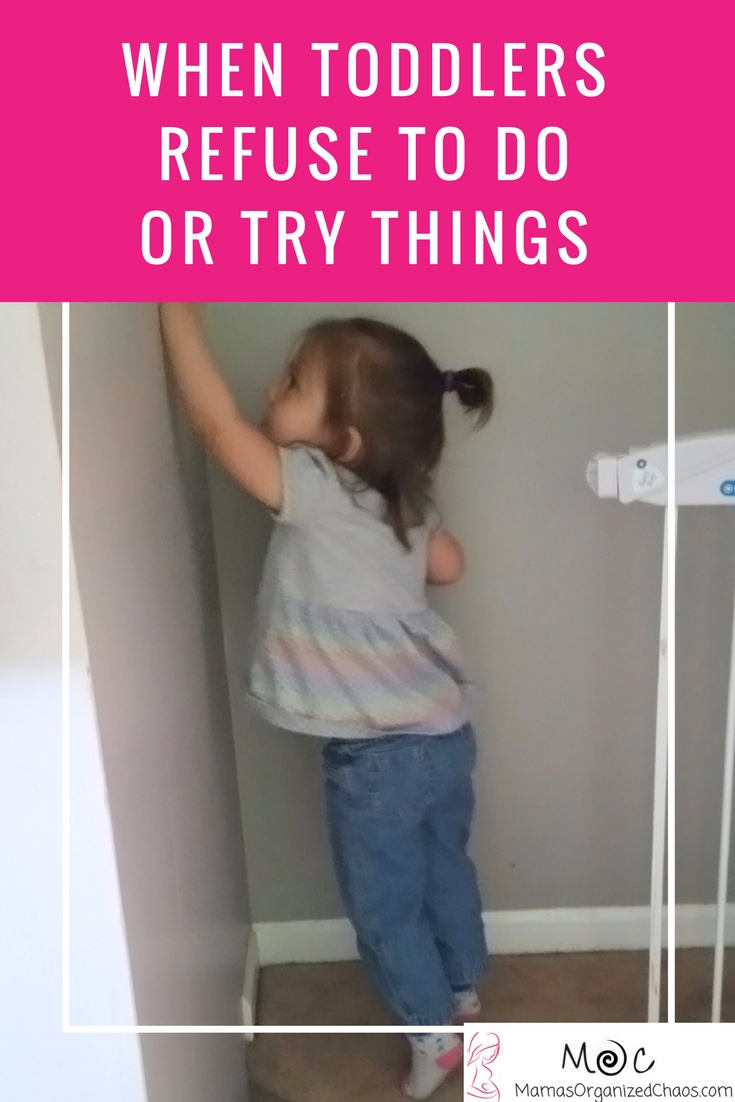