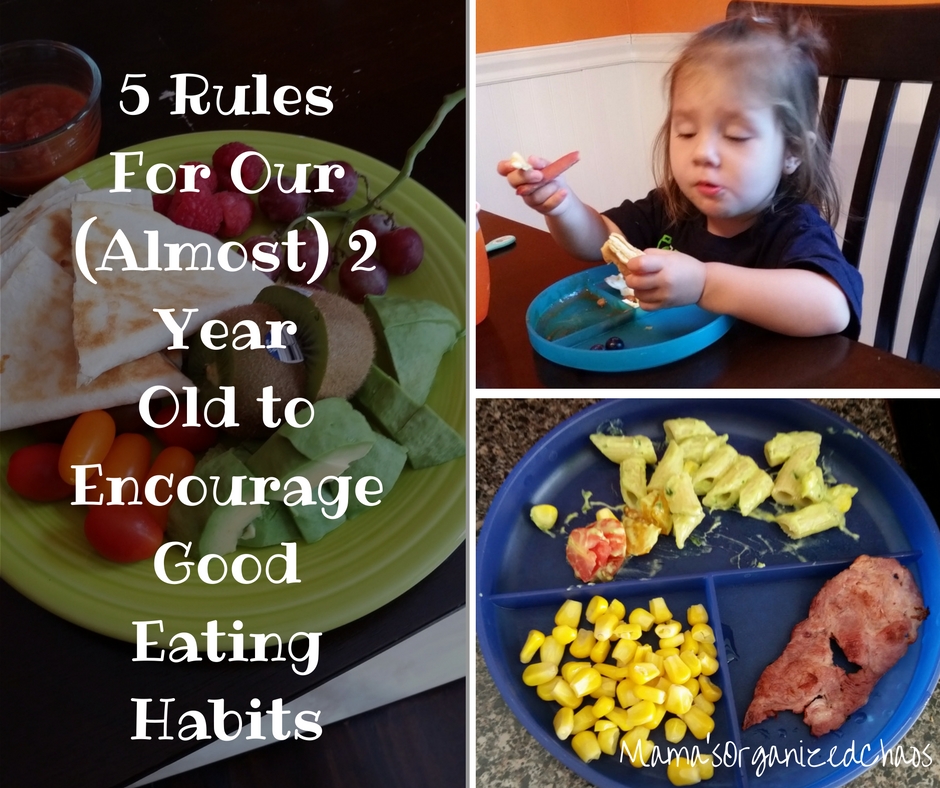 If you give a toddler a snack, she won’t be hungry for lunch. If she’s not hungry for lunch, she’ll need a snack before dinner….etc, etc! Rules are so important when it comes to toddlers and eating. Just like with any other aspect of their life, they thrive on boundaries and consistency.

Toddlers can be hard to figure out when it comes to food. They are often picky about what they eat, how they want to eat it, and when they want to eat, etc. Their favorite food yesterday can be on the list of foods that cause a tantrum today. One meal they’ll finish their entire plate and want more, yet another meal they hardly eat a thing (and seem fine with it).

Instead of thinking as a parent all of the time, it is important to think about things just as a fellow human being. Are there days where my favorite food doesn’t sound appetizing? Are there days that I just don’t feel like eating much? Are there days that my appetite is through the roof?  Are there foods that I dislike? Are there foods that I thought I would hate, but when I tried it, I loved it? I can answer yes to all of these questions, as I’m assuming everyone can. That means that my toddler is allowed to answer yes to these questions as well. It is my job as a parent to make sure they don’t go overboard, and that they are offered a variety of nutritious food throughout their week. And yes, view your child’s eating habits as weekly goals. You may not get meat in them every single day, but if you are getting enough throughout the week, that’s what matters!

So, instead of getting caught up in worries about how much my toddler is eating on a daily basis, I focus on the types of food she’s eating, and how well she’s eaten over the course of a week. Toddler’s are like any of us…they are not going to starve themselves. We can trust their instincts for when they’ve had enough food. And, if they try to take advantage of our faith in this system, it is important to have rules in place to help guide them.

Which brings me to…. Our 5 Rules For the Table (breakfast/lunch/dinner):

1. We only offer food at mealtime (no snacks)

Meals happen at mealtime. Once you give an inch, they’ll take a mile. If your toddler knows that they can simply get out of eating breakfast and be offered a snack in an hour, they’ll learn that quickly and take that route. If they know that their next meal isn’t until lunch, they’ll be more inclined to eat what’s offered.

When I do snacks:
If a meal is delayed for some reason (maybe we aren’t going to make it home in time for lunch at the usual time), I would offer a snack. In this case, I have freeze dried fruit crisps in the car that she can munch on as we drive home.

On extremely rare occasions, we give snacks to keep her entertained/occupied. If we are some place that she needs to stay quiet, and a snack is all I have to offer to make that happen, I allow that.

I also would be inclined to give a snack if she seemed to be excessively hungry one day. Let’s say she ate all of her breakfast and was still hungry an hour later. This could mean she’s going through a growth spurt, or just having one of those extra hungry days. On these rare days, I’d be ok with giving a small, healthy snack.


These occurrences are few and far between, however, and NOT the norm.

2. We all eat the same thing

One meal is prepared for the family. That one meal has at least one item that I know my toddler usually likes and eats well. We only offer what’s on her plate to start with. We do not go to the kitchen and scrounge up other items just to get something in her belly.

3. It is a requirement to at least try everything on your plate

Before you get more of something, you have to try what’s on your plate. Let’s say she’s eaten all of her broccoli, but hasn’t touched her chicken. If she asks for more broccoli, she needs to at least try the chicken first. Often, she likes it and keeps eating the chicken (or whatever she just tried). On the flip side, she also spits it out after trying the item. This is ok. As long as she tries it, she can have more of anything that was offered for the meal.

4. It is ok to dislike a certain food or not feel like eating


That brings me to this next point. It is OK to not like something. If she tries her chicken and spits it out, she does not have to eat it. We thank her for trying it. If she hates everything on her plate, that’s ok…you don’t have to eat. BUT- as rule #2 states… “we all eat the same thing”. I do not go find more food for my toddler to eat. She can choose to not eat anything on her plate, but she won’t be offered anything else for this meal, and she won’t be getting to eat in between meals. As I mentioned above, I make sure there’s something that she’ll usually eat (just to be fair).


All of our meals happen at the table, as a family. We do not eat on the go, on the couch, or munch all day long. We sit down, eat, and get down when we are done. Now that Caroline is close to being 2 years old, I am also requiring that she sit with me for a little bit if she chooses not to eat much for a meal. Typically, when this happens, she’s wanting to get down so she can go play. While it’s fine if she doesn’t eat, I don’t want her to be rewarded by getting to get down and play. She’s expected to sit with me for at least part of the meal. I don’t expect her to stay with me for the whole thing (yet), if she’s not eating. I do this because she’s still so young…but we’ll get there, and when she’s older, she’ll be expected to sit at the table until everyone is done!  Usually when this happens, she joins me and starts eating. On a good day, when she’s eating, she’s happy to sit at the table until we are all done (for now).

6. We all try to use utensils


Caroline is offered a fork or spoon with each meal just like everyone else. She doesn’t have to use it for the whole meal, but I do ask her to try and use it at some point. She usually obliges for a little while. She can use them decently well, so I just want her to keep practicing (without forcing it upon her).

So today was a classic example of typical toddler behavior.

Breakfast- Caroline hardly ate anything. Maybe ate 2 bites of food and was telling me she was done. She had been given some of her favorites for breakfast. I asked her to sit with me for a little bit as I ate my meal. She did great with that, but didn’t end up eating any more.

She was asking for lunch about an hour later. I simply reminded her that she had to wait for lunch. I explained to her that if she’d eaten more of her breakfast, she wouldn’t be hungry. Today was a hard day to not just give in and give her a snack. She was crabby. It was obvious that she was crabby simply because she was hungry. I offered her water, and she ended up drinking a good amount. Milk is only offered first thing in the morning and after her nap. I do this because they can fill up on milk just as they do a snack. I wanted her hungry for lunch so we could get back on track.

When lunch rolled around, she devoured EVERYTHING on her plate and asked for seconds. Had I given her a snack, this would not have happened at lunch. Instead, she ate a perfect lunch! She ate a cheese quesadilla, avocado, raspberries, cherry tomatoes, and grapes. She had seconds of everything!

Car snacks: As I mentioned above, we keep a stash of fruit crisps in the car as an emergency snack. I finally decided on this as the perfect item to keep in the car. I couldn’t figure it out for awhile. I wanted something that stayed in the car (not in a bag that I toted around with me). I wanted something that wouldn’t melt (so most granola bars are out), and that the texture wouldn’t change in the heat or cold. This snack works perfectly for that! These are individually wrapped bags of freeze dried fruit. They do not melt. They are sticky enough to not fall out of the bag when a toddler is handling them, but not so sticky that they make any sort of mess. They pose pretty much zero choking hazards as they would just dissolve in her mouth if she wasn’t chewing. So, we now have a family pack of these in the trunk. Oh, did I also mention they are delicious!? I like eating them too!

Other Posts of Interest: 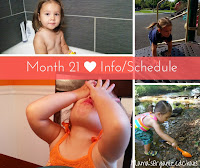 How We Handle Food and Cup Throwing at the Table

The Transition from High Chair to Booster