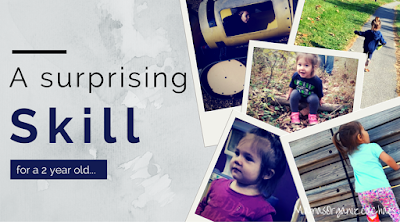 Mama: “Yes, you are wearing boots, too”

Caroline looks at a little boy: “Up, too”

Mama: “Yes, he’s climbing up the ladder, too”

Caroline: “Dark blue” as she points to my dark blue t-shirt

Caroline pointing at her shirt: “blue, too”


These scenarios kept happening over and over on Halloween day. I kept thinking, did she just say too and use it correctly? I mean, I don’t have any experience with 24 month old children to relate this to, but to me this concept seems TOO difficult for a not quite yet 2 year old. It is one thing to simply repeat the word when I say it, but she is actively using it on her own!

I spent all day wondering if I was just hearing things. Maybe she was saying two, not too- she has been trying to count lately. Then it would happen again. Nope, just heard it again and it was definitely used as “also”. By the time my husband returned home from work, I was certain she was saying too in sentences and using it correctly. I was pretty excited to tell him the news!

I don’t remember his exact words, but something to the effect of  ‘no way, you must be hearing her wrong’, was the gist of it. He also thought she might be saying two and trying to count- that is, until he heard her say it over and over again! At the end of the evening, he was also convinced that our daughter was indeed using the word too correctly in sentences.

It started Monday, and she’s been saying it nonstop since then. Not once has she used it incorrectly, so I have to assume that she knows what she’s talking about. I still can’t believe it. She’s grasping a lot of concepts right now (over vs under, day vs night, in and out, etc.). She likes to point out her colors and is learning to count. I feel as if these concepts are all happening around the 2-2.5 year old age range easily. I am blown away by her usage of too, however. Isn’t it fascinating to see what our children pick up on, and the unique skills they acquire seemingly all on their own!?