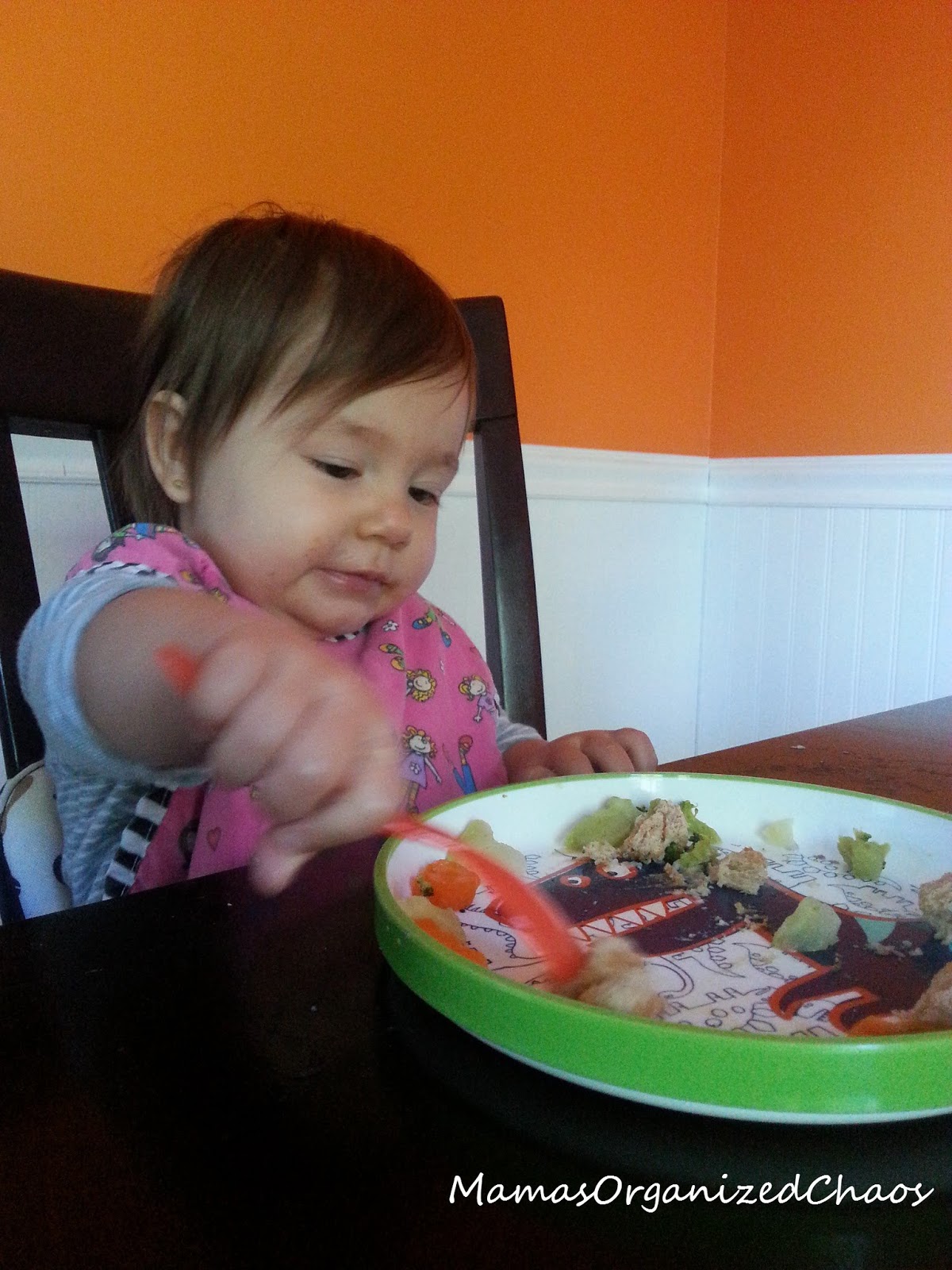 Caroline is just about to have her first birthday in a couple of days. She’s gotten much better at not throwing her food and her cup at the table. I wanted to take a minute to share what we are doing to be successful with this. The reality is that kids throw food and cups for entertainment, to learn, to test their boundaries, etc. So, we are far from done with this battle, but I think we’ve started in the right direction.

Here are the steps we take to help prevent and stop her from throwing food:

1. We say no
I think it is important for her to hear the word no. She may not understand it yet, but she’ll catch on eventually.

2. We explain the desired behavior

Children need to know that we don’t want them to do something, but they also need to know what we’d like them to be doing instead. It is also great to offer a choice if you can. In this case we explain that she can either:
– Leave her food on the plate  or…

3. Remove the problem
We go through the above process of saying no and explaining about 3 times at this age (since we know she doesn’t quite understand what we mean yet). If she doesn’t stop, we take her plate away.

4. Wait for the child to ask for it again
If she asks for her plate again (at this age she points to it), I instead give her one bite of food and ask her to eat it if she is hungry. If she eats it and doesn’t throw it, I give her a second bite, then a third. We tell her that she is doing a good job eating her food and PRAISE PRAISE PRAISE as usual! Giving good feedback is so important as well. If she eats them all successfully without throwing anything, she gets her plate back.

5. Repeat and be consistent
This won’t work fast to solve the problem. Babies are still learning. You have to do this over and over and over again. It feels like I’ve done it 1000 times. Just when I think I’ve gotten nowhere, she turns a corner and starts doing really well with it! I won’t lie, it is frustrating at times and I have not always been perfectly patient. It sounds easier on paper than it is in reality. Just hang in there and it WILL pay off.

Let’s say that none of the above works. She has asked for her plate back and continued to throw food. If she hasn’t eaten much, I try giving her something else to eat. It is possible that she is throwing the food because she isn’t enjoying it, or maybe her gums hurt and the food is too hard, etc. I try giving her one of her favorites: yogurt, banana, pancakes, string cheese, etc. If she still doesn’t want to eat those items, I tell her she is all done and we get down from the table.

7. Challenge your baby
I’ve seen with Caroline that she simply gets bored and likes to be challenged at times. So, now that she is approaching the 1 year mark, we started giving her a fork at mealtime. At the beginning of the meal I place food on the fork and set it down. She then picks up the fork and feeds herself. We repeat this until she tells me she wants to try herself. I let her. She makes a mess, but she is making a mess while trying to learn a valuable new skill. This is much different than throwing food. Giving her a fork has helped cut back on the food throwing considerably.

Since there are distinct times that your little one is drinking during a meal, we try to be proactive with this one.

While Caroline is drinking, we tell her “on the table when you are done, please”. We tap the table while we say this. Sometimes we say it several times as she drinks. If she puts it on the table, we PRAISE PRAISE PRAISE. If she throws the cup on the floor, we say no and explain what she needs to do. We either leave the cup on the floor until she asks for it later in the meal, or we pick it up and keep it out of reach on the table. At this age we give it back to her when she asks for it (as long as she continues to drink).

As with anything, you can expect your child to understand more as they get older. Therefore, the steps can evolve and the consequences can and should change. When Caroline is old enough to understand, she will not be getting her cup back if she throws it. She’ll have to wait until after the meal is finished. Don’t be afraid to alter things to work for your situation and your family. Make sure you reevaluate what is expected and what the consequences will be as they learn and understand more. Keep in mind what your baby currently understands, and, while you should set high expectations, keep things realistic and don’t actually let it frustrate you. It truly is a phase, and it really will pass.