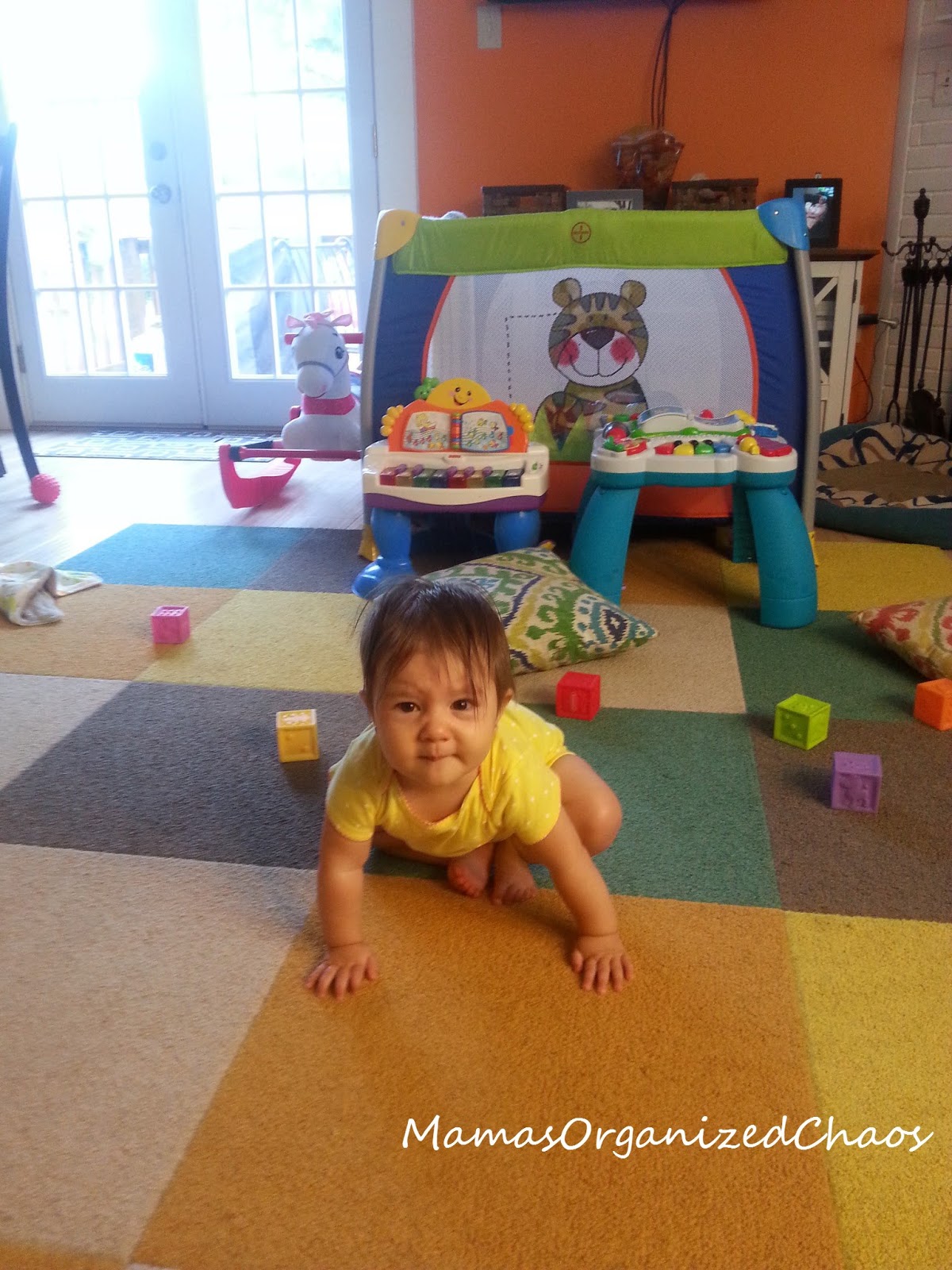 Every time Caroline learns a new skill that is of significance (sitting up, rolling both directions, standing, etc.), her sleep is interrupted. She likes to wake up because she is so eager to practice her skills.

She recently learned how to pull herself up, take assisted steps, and sit up on her own. Her sleep has been pretty much unaffected- until today (actually it started last night). I was waiting for it. I knew it was inevitable. She now wants to stand as much as possible. She wants to practice, she wants to walk, she wants to be up.

Last night she slept for about 45 minutes. She then woke and was super excited to practice those new skills! So she started trying to sit up. She tried for several minutes, but was unsuccessful and then started crying. Daddy and I went in and let her practice standing. When I put her to bed about 20/30 minutes later she went right out. She was happy to have gotten in some time with us. She woke up a couple of hours later and was trying to sit up again. Luckily, she decided she was too tired and went back to sleep.

Then came today. Her morning nap was a hot mess. She didn’t want to go to sleep on time, so we stayed up an extra 30 minutes. I then put her down and she thought about sleeping, but decided against it. She was up until an hour after her nap usually starts. What was she doing? She was trying to sit up. She was unsuccessful and eventually went to sleep. But wait- she only slept for 30 minutes. She wanted to get up and practice some more. Which she did. I left her in her crib until nap time was over and then we proceeded about our day as usual. She was happy to be up and unaffected by her lack of sleep.

Her second nap is now upon us. She isn’t sleeping at all. I don’t usually put her in her sleep sack for naps, but she is becoming quite fond of her sleep sack, so she grabbed it on our way to the crib and started snuggling with it. I let her hold onto it in the crib. Then the fun started. I watched on the video monitor as she tried to sit up but would then reach out to grab her sleep sack and take it with her- she’d end up back on her belly. This process repeated a good 15 times or so before she finally succeeded in sitting up with the sleep sack in her hand. Then she decided she wanted to stand. She, of course, wanted to bring the sleep sack along. Unfortunately, she was sitting on the sleep sack, so when she tried to lift it and stand she was having no success. She finally lifted that little butt and got the sleep sack out from underneath her. She then realized she needed both hands to hold onto the crib in order to stand up. She started trying to put the sleep sack over her shoulder!!!!! What!?!? How smart is my daughter!?! Seriously though. That’s amazing! She did not succeed, but what an awesome problem solver! She ended up flinging it too far and then reached out and was back on her belly.

We are 30 minutes into her “nap” at this point and she is going back and forth between trying to sit up again and possibly going to sleep . But, unfortunately, she is now crying. So, if she doesn’t go to sleep in the next 10 minutes I am going to go get her and forget the nap all together. Not excited to do that as she really needs to get a little sleep today or bedtime is not going to be fun! I did have an incredible time watching the video monitor, though. This right here is the reason to get the video monitor! I also learned today that she is either going to be in her sleep sack or not have it at all! LOL Literally at this very moment, she is just throwing the sleep sack around….covering her face, uncovering her face, covering her face, uncovering her face. She must be playing peek-a-boo with me knowing that I’m watching.

UPDATE: I wrote this post a few days ago and hadn’t posted it yet….so since then here’s what’s happened. The day after what was written above was a great sleep day! She slept great for both of her naps and at bedtime. The day after that she only took 30/45 minute naps and she took awhile to go to sleep at night. She is now sitting up by the time I can turn the monitor on.  She seems to practice for about 10 minutes or so during naps and then goes to sleep. The naps are short, however, as she is so eager to wake up and practice standing! She’s such a trooper, though. Through all of this, she is still in great spirits and seemingly unaffected by the lack of sleep that she is getting throughout the day.