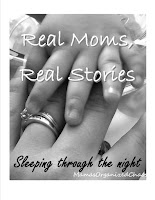 Today’s story is written by Christyn.
Her son’s name is Dominic, and he was sleeping through the night by 6 months of age.
She achieved this by setting and sticking to a consistent wake and nap schedule, and also enlisted the help of a sleep consultant.
I love her honest story that many moms can relate to!

And then all of those plans went out the window when Dominic got here.

When Dominic was born, my mother and two grown brothers were living with us as they awaited the completion of their new home. We had 4 working adults and 1 SAHM living under the same roof as a newborn. I felt immense pressure, completely self-imposed, to keep nighttime as quiet as possible for those who had to get up and go out into the real world every day. So all of our plans for sleep training were completely neglected as I attempted to keep Dominic quiet at all costs. The first night, he was in our bed. And I definitely never let him cry if I could help it.

After getting over the initial fear of having a newborn in the bed, I found that I actually really enjoyed co-sleeping. Night feedings were really easy and we both got much more sleep than if I had had to get up to go feed him in the night. The downside was that sometimes it felt like he nursed ALL night and hubby missed having the bed to our selves. He was supportive but was counting down the days until we had our bed back. This continued for 4 months until my family moved out and Dominic started showing signs that co-sleeping was no longer working for him. Night wakings increased and neither of us were getting any sleep. He also wasn’t taking ANY naps during the day. If I was lucky, I could take a 15 minute shower but that was it. And so months 4 and 5 were spent in a sleepy haze where neither of us seemed to get more than an hour of sleep at a time. Needless to say, we were both exhausted and irritable.

Our pediatrician recommended letting Dominic cry it out. He told us to put him to bed by 7 pm, close the door and not to go back in until midnight, no matter what. So we tried. Night 1, Dominic cried for 2 hours, slept for 45 minutes, and then cried for 30 more minutes before I couldn’t take anymore. Night 2, he cried for 2.5 hours, slept for 20 minutes, then cried for another hour. Night 3, he cried for 3 hours until I went in and nursed him to sleep. The next day I called the doctor and told him what happened and he agreed that Dominic didn’t seem ready for that strategy. I was completely heartbroken.

During those sleepless months, we learned we were expecting another baby (people often ask how that happened with all that we were dealing with – all I can say is that we have IMPECCABLE timing lol) and I decided that I couldn’t take another second of the sleep deprivation. My breast milk supply also completely tanked during this time and I had to start using formula (something I felt endlessly guilty about but in hindsight, D probably wasn’t getting enough to eat in a feeding which was contributing to his frequent wakings). My husband and I were fighting endlessly, I felt terrible, and Dominic was a grumpy mess. So when Dominic was 6 months old, I met with a sleep consultant that was scheduled to come present at a weekly mommy group I was attending. She literally saved my sanity.

First thing she suggested was that before I attempted to sleep train that I needed to get two consecutive nights of good, restful sleep. If you’re as exhausted as I was, you will do ANYTHING to get baby back to sleep even if it isn’t good for the long term. So I scheduled a weekend for Dominic to spend with grandma 🙂

The next thing she pointed out was that Dominic is what Dr. Sears refers to as a “high needs baby” but what she refers to as a “party baby.” This basically means that he’s very aware of and curious about his surroundings. He’s highly social and would much rather spend his time exploring and learning than sleeping. This meant that he didn’t show any sleep cues until it was “too late” – when those showed up, he was already so overtired that sleep had become almost completely impossible. To fix that she suggested that I keep wake times to no more than 1.5-2 hours and then to put him down to sleep, in his crib, even if he didn’t “seem” sleepy. I was skeptical but I tried it. And I was SHOCKED when he was asleep, on his own, within a few minutes of being put down.

Our next struggle was getting him to stay asleep. Up until that point, he hadn’t linked a single sleep cycle. Not once. So the consultant suggested letting him fuss for up to 20-25 minutes between sleep cycles to see if he would eventually learn to link them. Again, I was skeptical. and, yet again, it worked.

Within 10 days, Dominic was on a predictable schedule with 2 naps, each lasting at least 2 hours AND sleeping through the night. At 11 months old, I can count our night wakings since then on one hand. For the first 3 weeks after this started, my husband and I still didn’t sleep because we were anticipating hearing that little voice crying in the middle of the night. It took a while for us to believe that this was really going to be our new normal and allow ourselves to sleep. But we HAVE slept since then and Everybody is so much happier. Dominic has completely blossomed and started learning things so much faster than he was before. Looking back on those sleepless months, there are so many things that went “wrong” that I can now confidently say we’re a result of sleep deprivation in all of us. And I am so thankful to have those issues resolved! Now we just need to keep all of these things in mind for #2 🙂

I do have to add that our families were NOT supportive of this change at first. We both received a lot of backlash from our families for trying to “force” our child to sleep. We were told that the problem was that we were trying to “make him sleep when he wasn’t tired” and that we “NEVER slept” as babies so this was totally normal. Thank god we didn’t listen to them or we probably still wouldn’t be sleeping.