Today’s story is written by Daria Lee.
Her daughter’s name is Fiona Lee, and she was sleeping through the night by 6 months of age.
She achieved this by getting her on a routine (through daycare), and using CIO.
Check out her blog at https//amalthea1181.wordress.com/ 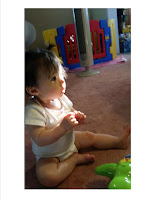 OK so our sleep battle was really more like a war. In the beginning our little Fi was a great sleeper and really do mean in the beginning. She slept great until she hit 9 weeks and then all hell broke loose. She decided that she hated everything; sleep, eating, being put down…you name it, she hated it. She started eating less and sleeping less. Nothing satisfied her. We came to learn that she had a milk protein allergy. We switched her to hypoallergenic formula, Similac Alimentum, and hoped all would be well…it wasn’t. She still wouldn’t sleep. It got to the point where she was only sleeping in 45-75 minute increments and was barely napping during the day. So many people told me that babies do not sleep through the night, it is just their body, they don’t have the mental ability to do it, they need their mommy, blah, blah blah. I would not accept that as an answer. I mean she would not even nap! Like at all!

The pediatrician wanted me to let her cry as soon as I brought her home from the hospital because that is what she did with her children, who are all well-adjusted young adults. I desperately needed sleep and so did my poor husband. He was home on paternity leave while I went back to work and he was very frustrated. I was suffering from severe anxiety and possible some postpartum depression. I didn’t want to come home from work; I would take on lots of overtime so that she would hopefully be asleep by the time I got home (which was never the case.) I was at my wits end. I needed help!!! I started seeing a councilor through my work and leaned on my mother for help.

She started taking Fi on Wednesday nights so hubby and I could get some sleep. At 3.5 months we started Fi on baby rice cereal, a little early I know, but she was hungry. The formula was going through her like water. While this did not help her sleep (as I do not think giving them food early will make them STTN) it did make her more pleasant during the day, which was a start. At 4 months she started daycare and it was the best thing that could have happened. I love daycare!!! She started to get on a routine. At 4.5 months we also decided to start sleep training. My philosophy is go big or go home. We took her out of the rock and play (she was climbing out it even though she was strapped in), out of the swaddle and directly into the crib.

We decided to do it all at once instead of in stages. You may think we were crazy but it worked for us. Fi learned to roll over and this was the BIG blessing as she did not like being on her back. The sleep training really began to work. I am not going to lie the first night was hell, the second night I thought I stopped into the seventh circle of hell but the third night was better. We decided against extinction and did a modified Ferber, intervals did not work for us…they just made things worse. We did what my mother did with my brother and I…she set her own time limit, a set number she was comfortable letting us cry…10 minutes and that was it. If we were still crying after 10 minutes she went in and patted our backs, no picking up unless we were crazed. This is how we handled Fi.
After about 3 weeks Fi was sleeping from 7:30p until 12a for a bottle and then back down til 7am. When she hit 6 months we stopped the middle of the night feeding through the same method we used to get her to sleep initially. Now she sleeps from 7:30p until 6a when hubby gets her up for daycare.

Now every night is not perfect, she has nightmares, teeth, illness…whatever that may change things up but for the most part she is sleeping like a dream…and our family is stronger and better for it. I am a huge advocate for sleep training and allowing my child to work things out on her own. I help her through things but I do not coddle her and in the end that is what she needed to get the sleep she, and we, desperately needed.

I hope that my story can give you some hope that there is a light at the end of the tunnel. Parenthood is not easy but in the end it is so incredibly worth it. Take each day one at a time, each problem as it comes and each smile with infinite joy. This is what makes life worth living!