Today’s story is written by Andrea.
She has 3 children and they were sleeping through the night at 5 months, 9 months, and the 3rd is still too young.
She achieved this by using cry it out methods and Babywise. 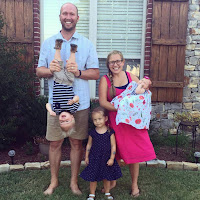 Hi Mamas!
My name is Andrea, I’m a mommy to THREE sweet beans born in less than three years!! I started the “Babywise Mamas” Facebook page in 2012 when my oldest was about 4 mos old…it’s really cool to see it have over 3500 mamas helping each other out in there now! Here’s my story for each of my kiddos getting to sttn.

Disclaimer: I’m a HUGE fan of a lot of the overall principles of Babywise…but I’ll be the first to admit, I don’t like strict schedules or staying home all day every day, so I’ve taken what works for me and run with it! Also, prior to being a mommy I had thousands of hours babysitting experience and even nannied full time for 6 mos – kiddos what were 9.5mos apart, both experiences have helped me be a VERY go with the flow BW mommy. Also, we have lived in an apartment the whole time having kids, so that has shaped my experience as well in terms of teaching my kids to sleep through noise, etc.

With my oldest we lived in a large one bedroom apartment in an adorable little 4-plex downtown. All wood floors and TONS of windows that I never could contend with covering. Her “room” was the dining room- so she had a space, but not an actual enclosed room with a door. She slept in her moses basket next to my side of the bed until she was 8 weeks old, then I bravely moved her to her crib and we all started sleeping a bit better, not hearing each other’s every noise. I followed BW pretty true to schedule, trying to be home for all but one nap every day. She was very good at napping in her space with me doing my daily stuff for many months. I recall we were in a good groove until we hit the dreaded 4-month sleep regression. I had no idea such a thing even existed until it happened and I got to googling. In her 4th month we took 2 trips, so I tried to extend lots of grace to her night wakings. But by 5 mos,  nights were in bad shape. So I got to googling again and found the best article on CIO (mind you, with all my babysitting experience, I was very comfortable with CIO cause most the families I babysat for were comfortable with it- “at our house we have a 15 minute cry rule before you go in” etc). Here’s the blog post: http://noobmommy.com/2008/11/to-ferberize-or-not-to-ferberize.html So the day she turned 5mo I decided to ditch the swaddle completely (we’d been using the Miracle Blanket) and do Ferber CIO. It took 45 minutes the first night at her first wake up, 30 minutes the second night, and complete 12hrs sttn by the 3rd night, I was stokked!! I however continued to wake around 4am and pump for quite a while as that was the only time I could ever easily get 8-10oz for my “grandma days” with my MIL. Then when she was about 7mos, I got the flu and my milk supply took quite a hit, she began nursing again at that 4am time. I was ok with it for quite a while as it wasn’t actually that disruptive to my night since I was used to pumping. I always found it was easier to do a quick nursing than have an unsettled last few hours of sleep each night. If i remember right though, she went back to a full 12hrs again before a year. Then right at 12mos she started waking again a lot- I credited to learning to walk. I was also pregnant again and working towards weaning her. So for a whole week Daddy went in at every night wake up and her night wake ups subsided almost instantly- he didn’t mean food. We moved into a 2 bedroom apartment when she was 14mos. I could easily cover her one window and my great sleeper became and excellent sleeper! We literally didn’t hear a peep from her at night from 12 mos until we hit the 2.5yo sleep regression! It was glorious. We are now charting the waters of 3yrs, big girl beds and opinions. I’m happy she’s growing up, but I won’t lie, I dearly miss the days of simply just putting her in her crib and that was that! (side note: she went to one nap a day at 17mos)

Ok, so chapter 2 of my novel: My 2nd is 19mos younger than big sister. With him, he broke out of the Miracle Blanket every single night from day 1, so I ordered him a Woombie of Amazon and LOVED it! He too slept in my Moses basket next to my side of the bed, but this time till 12 weeks. I was SUPER nervous about putting them into the same room since my oldest was such a perfect sleeper. He too was not getting to fully sttn just by doing BW, so I figured so what, I’ll do the same CIO just like I did with my 1st. Well, let me tell you this. No two kids are the same, you absolutely cannot compare you kids or parent them the exact same way. We all hear that, but until this point I didn’t believe it. He could cry and cry and cry. CIO got us absolutely no where. I found myself wearing a trail to his bedroom each night just to replace a binky several times (big sis had found her thumb when unswaddled her at 5mos). Every month I would try Ferber CIO with him. Nothing. I took a trip with him 8.5mos to visit friends in CA in their 750sqft beach house- 4 adults and 3 kids, I had no allowance to letting him cry. I lost SO much sleep on that trip. Also, but the time I got home, my milk had pretty much dried up. He wouldn’t take a bottle or sippy of any kind of milk, so I got to work counting calories for him that I would put into smoothies. He ate 2 high calories smoothies a day plus other solids for 6 mos. Anyways, when I came back from that trip I was exhausted. A week after I knew he was getting enough daytime calories from my smoothies (900-1000 calories a day) I simply unplugged my baby monitor and did extinction CIO. In hindsight, I did A LOT of things wrong with him- I allowed the binky & rolling to his tummy to become problems requiring me to go in and fix. I also got really gung ho about working out and counting calories with the Lose It app to lose my babyweight. While I thought I was doing just fine with my milk supply, in hindsight I clearly was not. He did not gain well for 5 consecutive months OR sleep well obviously. After I did extinction CIO with him, he’s slept near perfect every since! Also, for having 2 kiddos in a room, doing CIO with either of them for various reasons, me being in their room to replace a binky, etc has NEVER affected the other child. It’s truly amazing what they can tune out! (My 2nd went to 1 nap a day at 8mos. Super early, but it worked so well with my daily routine, I ran with it!)

And now to number 3. She is 16mos younger than my 2nd and currently 14wks old. We are still in the same 2 bedroom apartment and since our bedrooms are big I do have 2 cribs and a toddler bed in the kid’s room, but my 3rd has only slept in her crib a handful of times for a nap. She is by far my best sleeper from the beginning- 4 hour stretches at night instantly from the first night in the hospital! The one piece of baby gear I bought for her was an Arm’s Reach Mini Co-Sleeper. It’s like a mini Pack n Play, but with one side that drops down, it’s level with my mattress so it’s super easy to get her in and out at night to nurse. It’s awesome! She also has only been loosely swaddled in a muslin blanket from the beginning. My daily routine is about the same- we eat breakfast and do our morning stuff till about 10am with daddy home. Then we go do something or have someone over – including lunch- until everyone takes a big nap at 1/2ish pm for 2-3 hours. Then we snuggle on the couch and read books for a while, I do household chores, make dinner, daddy comes home around 6:30-7pm and he puts the older two to bed after playing for a bit. I’ve had this routine since we added my 2nd in- lining up everyone for a big afternoon nap is my BEST piece of parenting advice for closely spaced kids!! So my 2nd & 3rd have become very adept at napping on the go as we are rarely home all day every day- carseat, arms, stroller, ergo, etc. My 3rd takes a morning nap, a catnap, long afternoon nap and then an evening cat nap currently. And she sometimes naps in her co-sleeper or on the couch or in her swing or in her crib…building in flexibility in sleeping is highly important to us as we really like to travel…and I just have my hands too full to make sure things are “just so” anyways, haha! She currently goes to bed around 8pm and wakes once around 4am to nurse and then usually gets woken up by 7am by someone (ahem big sister). I still am undecided when I’ll move her to the kids room, the Arm’s Reach sleeper is just so easy for me right now. I may even just go to the PNP in the corner of my room with her next (it’s what big brother naps in daily).

If you’re still with me, haha, the BW principles I still love are – not feeding to sleep (EWS), set bedtime, and making your marriage a priority because your children are sleeping in the evenings & also not in your bed….but you can see, I’ve become more relaxed the more kids I have and I know we’ll get to sttn sooner than later, no worries!