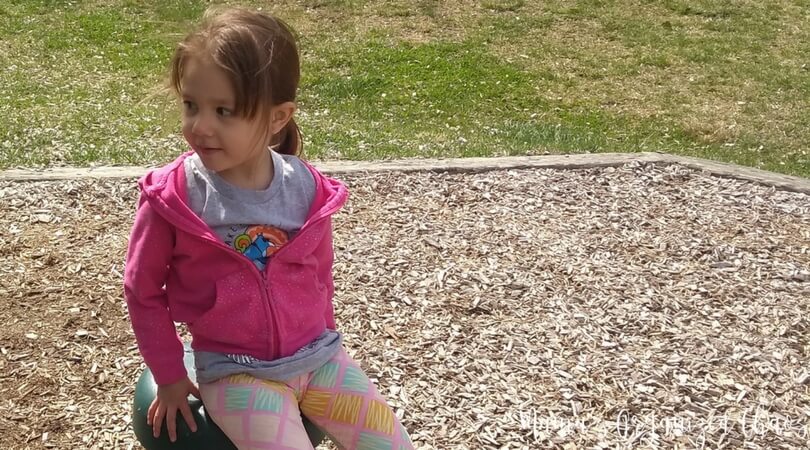 Caroline will be 3.5 next month. She talks like she’s 10, acts like she’s 13 at times, and then surprises me when she acts like a toddler the others LOL. She’s independent, brave, and hardworking. She’s focused, and so very hard on herself. She’s sweet and so thoughtful. She’s really wanting to be a big sister again, and she’s insanely funny. She cracks us up all the time with things she says!


Caroline’s schedule hasn’t changed in ages. She still wakes at 7 am, has rest time after lunch, and goes to bed at 7 pm. She is capable of skipping her nap if our schedule needs that change at any given point, but 99% of the time she is given (and takes) her nap.


We had to experiment with a few napless days here and there due to selling our house. We had to be out of the house for showings, work that was being done on the house, etc. One day is all good, but several in a row leads to a cranky toddler! We really like to keep our routine in place.


We’ve done our best to keep the schedule consistent these last couple of months, even with the interruptions, but it just wasn’t always possible. Caroline is that toddler that refuses to miss out on anything and also doesn’t like to fall asleep in the car- that only happens when she just can’t fight it any longer. Usually she can fight it LOL


So, in the past two months, we’ve listed our house, sold our house, moved into an apartment, and are having a house built out on some land. We are so excited. Caroline is excited to paint her new room purple. With all of the changes, Caroline has been incredibly understanding through it all and very flexible.

Eating habits haven’t changed much, either. Caroline eats one really good meal a day. She really loves egg sandwiches now… all kinds. We also drive by English Muffin Way (and an English Muffin Factory) every day now… and she loves eating English muffins for breakfast even more so now as a result.


She’s also huge on chocolate right now, and is pretty food motivated. She agrees with Mama in that Reese’s eggs are the best candy ever. She’s similar to the dog, in that she hears a wrapper being opened (chocolate or cheese, or anything else), and she smiles comes running, and asks “what are you eating?” I can’t even hide a bite of something in my mouth. She’s well aware if anyone in the house is eating, and wants to partake.


Even with the napping hiccups mentioned above (just due to us not being able to be at the house for nap time), she’s been resilient with her sleeping. She makes up for any lost sleep, and takes a nice long nap the next time she gets one. She goes to bed extremely quickly on the no nap days. On regular days, she naps for 1.5 hours on average. She then goes to bed at 7 and stays awake for a little while reading and playing with her stuffed animal friends.


Since we’ve moved into our apartment, she’s started waking a little early, and coming into bed with me. She does not go back to sleep, but we get some good cuddles in and have some fun chats.


Caroline is doing great with all of her classes. She’s still in school two mornings a week, has gymnastics once a week, and swim class once a week.


Gymnastics has been so fun to watch. She pretty much does everything without assistance now. I have loved seeing the progression. Even if she can’t do it all on her own, she insists that her instructor not help her. I love the independence and hard working attitude.


I just recently switched her to a new gymnastics center closer to our new home. She’s doing great. It’s much harder, and much more strict. She’s really responding to the higher expectations and stepping up to do a lot more than she would have otherwise.


School is great. She seems to really have a good time and talks all about everything she does there. She uses her classmate’s names perfectly in her stories of the day. I love the drive home getting to hear all about her day.


Only about a month of school left, then she’ll have summer break, and start at a new school (again closer to our new residence). In the meantime we are having to leave an hour early in the mornings to get her there. She’s been super flexible with it, though!


Swim class has been relatively static lately, but she finally got to move up levels! I’ll write all about it soon. She’s a Minnow, now with a yellow cap!


SINGING! Oh my gosh, this girl can sing. She sings about anything and everything. She narrates what she is doing, what she’s thinking, and so much more. She sings as she plays, and even before going to sleep. I’ve heard through the grapevine that I, too, used to narrate sing when I was little. I love that she does this.


She is insanely excited about having a “new baby” (no there is no new baby yet). She’s all talk about it, though, and she’s so thoughtful. Every morning she makes a pile of toys and books. She calls me in to look at everything she wants to give to the “new baby”. She’s also informed me that, even though we are getting a new house and the baby can have his/her own room, she really wants to share her room. She’s so sweet.


Since moving into the apartment, she’s been asking for playdates. They just haven’t happened in awhile. She went out to the playground at the apartment, and there were several (MUUUCH older) children playing. She just joined right in. She was talking to them and being so brave. We were very impressed.


The next day, we went out and she played catch with one of the older boys. She then later told us she wanted to bring something out to share with everyone. She doesn’t understand why those other kids aren’t there all day every day LOL. It was such a kind gesture, though. Since she’d been so thoughtful, we took her to Target and bought her a nice outside ball to share with her friends. And, Mama is setting up a local playdate group so we can meet some children her age.


Her favorite things to do are still 1. go outside, and 2. pretend play. We got her a Peppa Pig playhouse that she’s really enjoyed, but even more so than the house itself she really just loves having more and more tiny characters!


Her favorite color is still…. purple.


Sandwiches… I’m thoroughly impressed lately that she’s eating sandwiches in their entirety, and not pulling them apart to eat everything separate. She loves peanut butter and jelly still, and devours egg sandwiches of all kinds!


Caroline has really started to bond with Moose. She hugs him and throws the ball for him. She likes to feed him as well.


Just the other day, Caroline became very self sufficient in putting her underwear and pants on. She lays it out on the floor with the tag on the bottom- “close to the carpet”, and puts it on all by herself. She’s doing so great with it!


She can put her shoes on by herself, but likes help getting the tongue just perfectly set.


We’ve been practicing writing the letter C. She does a great job when she focuses and does her best! She’s even holding her markers and crayons right!


Caroline can still throw some amazing, huge, fits. She’s become outstanding, however, at calming down. For the most part, her fits are passionate but short, now. She knows to use her calm down card ideas as strategies to help calm down. She does this all on her own. It’s very impressive.


Sesame Street is her current favorite show. She loves watching it and I think she’s the perfect age, now to really benefit from it. She also still watches and enjoys Daniel Tiger, and Dinosaur Train. We no longer get Paw Patrol or Top Wing for free, but she’s been such a good sport about that.


We take Caroline out to the new lot that we purchased…. she can spend forever just wandering around, picking flowers, and finding rocks and sticks. She’s going to love her new yard!


Caroline is very decisive and knows what she wants. A funny story… we went to a friend’s birthday party. The kids were all told to pick chocolate or vanilla cake. If you want chocolate, put your hand on your head. If you want vanilla, put your hand on your nose. Caroline put one hand on her head and one hand on her nose. Thinking she was confused, I asked her which she wanted. She replied, “both.” HAHA! Smart girl. Well played.

I think the most impressive thing that Caroline is doing right now, is walking up to other children at playgrounds and asking “would you like to play with me?” She’s so brave! She likes me to come with her, and I count to 3 to get her going, and then she asks all on her own. She doesn’t quite know what playing together really looks like yet, but she’s learning and very eager to do so.


Caroline is also being so helpful. In her new baby excitement she’s been asking to read one of the Daniel Tiger books that we have on being a big sibling. They talk a lot about being “a big helper in your family”. I think this is a big reason Caroline has been offering to help so much. All of the time I hear, “I can help with that, Mama.” Or, “I can do that for you.” Pretty amazing to watch her be so helpful all of the time. 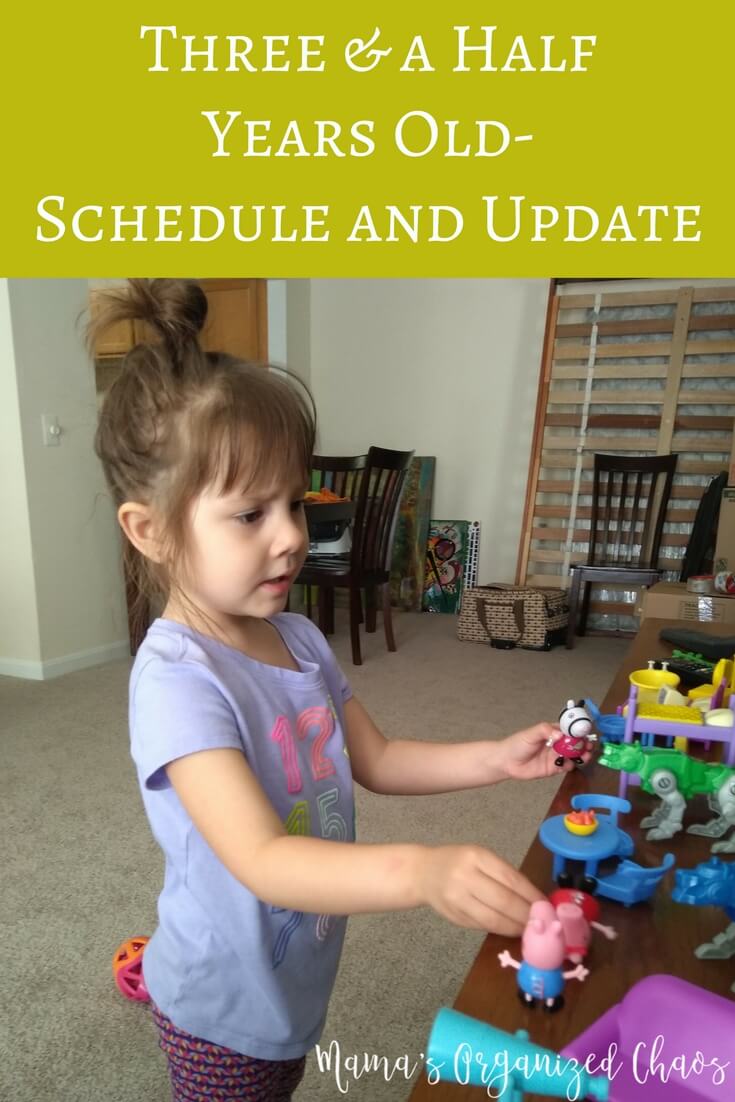