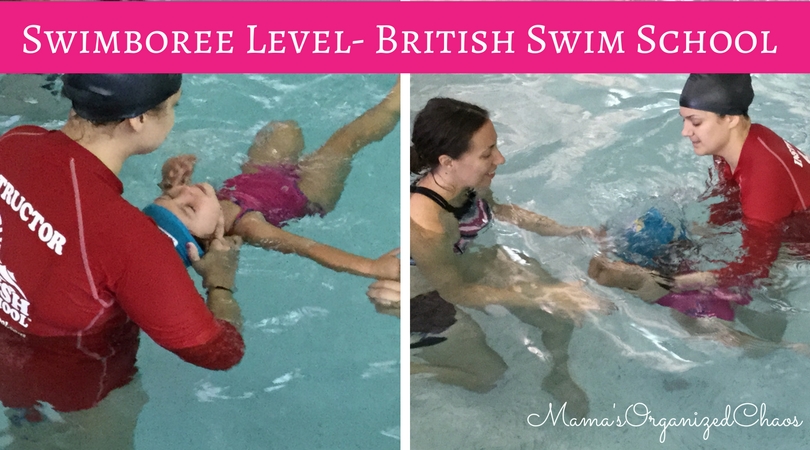 “Building on our Tadpole skills, little ones begin their water survival skills through a structured program of songs, games and fun. Your instructor will work one-on-one with you and your child. Students must meet Tadpole goals in order to enroll in Swimboree.”

Caroline did 2 lessons in the Tadpole class, and it was clear she needed to move up. Aside from being my stubborn little girl with regards to going underwater, she’d mastered the goals easily. And, when it comes to going underwater…she’ll do it, she just prefers not to. But like with anything, she listens and goes along with the flow. So, she’s now been at the Swimboree level since the end of June, and she’s doing great. We see progression each week.

A look at all of their programs can be found at here.

Swimboree is much different than the Tadpole level. At the Tadpole level, there is tons of whole class engagement, songs, play, and mostly a water acclimation focus. 90% of the time is spent with a parent. Swimboree, on the other hand is much more focused on the one on one interaction of instructor with student. Parents are in the water the entire time, and responsible for engaging and practicing with their child when the instructor is working with another student in the class, but the entire class is made up of those one on one interactions. The instructor makes her way from child to child practicing different techniques at least twice with each child. The maximum class size is 4, so we still get a lot of one on one time with the instructor and lots of skill practice in.

These are the skills that are being focused on:


Assisted or independent back float
Even though the skill progression is happening, and the focus is more on survival than acclimation, the instructors still make sure to make this class fun and enjoyable for the children. As they are assisting the children doing back floats, they sing songs, or look for pretend animals on the ceiling, etc. The back float is incorporated into pretty much every technique used in this class.


Caroline does her back float very well. She prefers to count to 10 instead of singing. She’s great about relaxing her legs now, and I’ve gotten her to the point that I’m just barely resting her head on my shoulder. The only time she struggles with her back float is when she’s just done a rollover in the water (see below) and has water on her face. She prefers to wipe the water off prior to floating, so she struggles to do that, and then ends up with more water in her face, which bothers her, etc. LOL But for the most part, she’s comfortable doing the back float on it’s own. I’m eager to see her do more of an independent float as I think she’s very capable now.


Full submersion sitting or standing
At the Swimboree level, the children are given the chance to sit and fall into the water, or stand and jump into the water. They are then allowed to submerge, and then assisted into a back float.


Caroline is getting out of the pool mostly on her own at this point. She then prefers to jump into the pool. She’s doing a great job standing on the edge, and jumping out into the pool unassisted. I then let her submerge into the water, and she does great with this! This is probably her favorite part of the class.


Submerged rollover
This is the hardest skill in my opinion. Children are submerged underwater, and then rolled over while still underwater into a back float. It’s fun, but hard. As we all would, the children end up with water on their faces as they go into the back float.


Separation from parent
Children work one on one with the instructor, out of the parent’s hands. This is done at least twice for every skill that is being practiced. Then they go back to their parent while the instructor works with another child.


For the most part Caroline does great with this. On skills like the submerged rollover, however, where she feels uncomfortable, she begs for Mama. She also seems to prefer jumping in only to Mama. I think this is one of those things, that if I wasn’t in the pool, she’d do just fine as she does with going to the instructor for all of the other skills. The fact that I’m right there and close enough to lend a hand, lends itself to her asking for me. I think she will be like this until she is in the next level and Mama isn’t allowed in the class with her.


Independence
At the end of the class, the swim rings get brought out and the children get to practice their independence and move about the pool on their own.


Caroline has always been great with the swim ring (took to it immediately). She has not a care in the world when she’s in this and really doesn’t mind if I’m anywhere near her. I stay close enough to help if she were to slip through and need me, but other than that she does her thing and really enjoys kicking around the pool and racing me to the other side!


Caroline
There is a decent amount of wait time in this class, since it is very focused on working one on one with the instructor. We have a great time practicing skills together during this time, so Caroline stays very focused and really enjoys her time in the pool. At the beginning of every class she says “I don’t want to go underwater”. We have her submerge and practice regardless, and by the end she’s begging for more. When I ask her what her favorite part of swim class is, it’s “going underwater”.


Mama
These lessons are not nearly as “fun” and engaging as the Tadpole level, so I wasn’t sure what to expect. The lessons are more challenging and much more focused on the actual survival skills. I think Caroline has taken to this challenge very well. She was getting bored at the Tadpole level quickly simply because of her skill level, even with all of the engaging activities, so this class was just what she needed. She’s responding to the challenges well and I see progression every single week. We had two weeks off (July 4th and the pool was closed another week), so she’s had a total of 3 classes at this level. She’s gone from not wanting to go underwater at all, to it being her favorite thing to do. Any time she’s hesitant, the instructor is great at trying to come up with ways to reassure her. They look for pretend sea creatures on the ceiling, sing, etc. I really appreciate how great the instructors have been with Caroline and how they respond to her individual needs. They find a good balance between expecting her to try a technique, and understanding her limitations. The high expectations are just what Caroline needs to be successful. As we do for gymnastics, our rules are that we “try everything” and “do our best”. Caroline always does this well, and I’m always impressed with the classes!

Progression
Just last week I was talking to the deck ambassador about her moving up to the next level. She’d noticed that Caroline was really close to being ready and her one comment was that she needs a bit more independence from me, and that she’d be ready to go. I think we’ll be trying the next level very soon!


Here’s my assessment of her with respect to the Swimboree goals:

Goals of the Swimboree class:
– Assisted or independent back floating Completed (assisted)
– Assisted submerged rollover Needs some work.when combined with back float
– Full submersion sitting or standing Completed
– Able to separate from parent Completed and will only get easier for her when I’m not in the pool
– Independent in the swim ring Completed

The next level is called Seahorse. It is the first class where she’ll be in the pool without Mama! The age range is 18 months to 36 months.“The instructor works one-on-one with each child following the same structure and emphasis on water survival as the Swimboree class. While the child is in the water, parents sit on the pool deck and actively participate in their child’s lesson. Students must meet Swimboree goals in order to enroll in Seahorse.”

I think Caroline will do great without me in class. My only concern is that I’m right there…poolside. She may want to come over to me, or be upset that I’m not with her since she’ll be able to see me so easily. With school, I drop her off and leave. She does fantastic with it…but I’m also out of sight out of mind. With gymnastics she’s just about to the point where I’ll be dropping her off as well… but again I won’t be in plain view. I’m not entirely sure how she’ll do with being able to see me but not be with me….we will find out soon!


Update: I spoke with her instructor last night. We will be doing a trial run with Mama out of the water next week!

Special $15 Credit
If you live in Montgomery County or Frederick County, Maryland, and are interested in signing up for your first lesson, I am really excited to announce that you can receive a $15 credit towards your account just by mentioning my full name: Katrina Villegas! The information for our central Maryland British Swim Schools can all be found at this link. And not to worry if you live elsewhere, there are British Swim Schools ALL over the US! 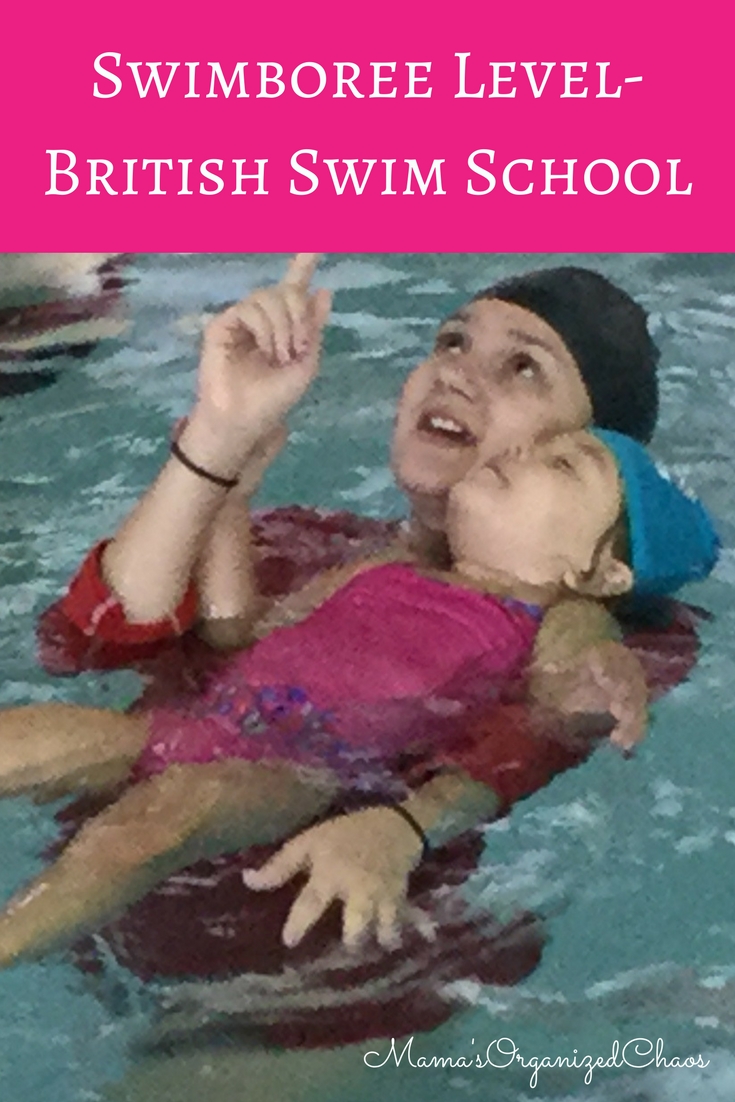