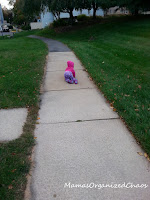 It is amazing how much time goes by from one leap to the next. The duration of and between each leap is so lengthy that it almost seems impossible for only one leap to have occurred since I last wrote about leap 6 back in August!

Leap 6 brought a large set of skills to Caroline’s world. Her major milestones were sitting up on her own, learning the pincher grasp, pulling up, and assisted walking.

Leap 7 hasn’t been quite the whirlwind of events, but it has certainly been an exciting one! Between leap 6 and leap 7, Caroline learned how to crawl, and she has since mastered this skill. She can put her crawl into “turbo”

speed and really kick it into high gear! She is now cruising, climbing, and even going up the stairs on her own. She is fearless. She can even walk with her walking toy and keep her balance on her own. I’d say it won’t be long until she’s walking, but she seems so content to crawl at the moment that I’m not sure when this next step might occur. 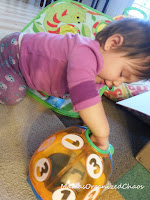 Caroline can now put things away as well. She can put her blocks back into the bucket when I ask her to, and she attempts to put puzzle pieces in the correct location. She puts shapes into the shape sorter (if I show her which shape goes where), and she is loving these new skills.

As far as sleep disturbances, there really haven’t been any with this leap. Her schedule has been tweaked here and there just by little bits, and she is being weaned off of nursing without any issues. She goes down for naps just fine, and continues to sleep through the night without issue. Her naps have had periods where they became shorter, and as a result we have two schedules at the moment: the typical 2 nap schedule, and the new 1 nap schedule. She is doing great with both. I anticipate keeping both schedules for awhile until she shows me she’s ready for a full transition (most likely closer to the 1 year point).

She seems to understand simple phrases now and is really responding to us so much. She says “Mama” and “Dada” and is attempting to say other words as well. She says “Bye-bye”, and tries to say “light” and simple words like “book”. If you ask her what a lion says, she roars the cutest roar you’ll ever hear. 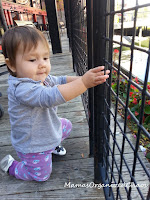 So hard to believe, but this was the last leap of her infant months! She will be 1 year old shortly after she enters into the 8th leap and becomes a toddler. The time is flying by; the baby times are dwindling quickly. It is amazing and emotional all at the same time. So glad to see her growing up, so sad to leave the snuggles behind. I know they will come again soon, though!